No exclusive rights to import pigs from Thailand to Cambodia 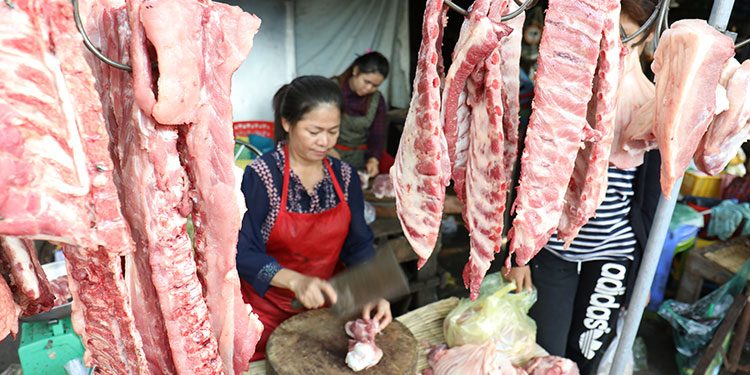 The Minister of Agriculture, Forestry and Fisheries has rejected accusations that it has offered a company exclusive rights to import pigs from Thailand, according to a letter responding to the Cambodia Pig Supply Association.

The Minister has stated, that the association’s report missed information about big imports from neighbouring countries, especially from Thailand by accusing the ministry of practicing a monopoly act.

“After receiving a recommendation from the Prime minister, the ministry has updated local supply and demand of meats and we have reduced imports of live pigs by 70 percent,” the letter read.

Prime Minister Hun Sen last month instructed the Ministry of Agriculture to expand crop farming and animal raising to supply local demands by reducing imports during the spread of the pandemic.

According to the Ministry, currently there are seven companies that have obtained licence to import live pigs from neighbouring countries.

However, the ministry has temporary banned two companies, saying that they have abused the ministry’s regulation on import.

“After the ministry’s actions, we note that extend of local pigs raising, both by small breeders as well as commercial farming has increased and the price is also stable,” the letter read.

Local livestock numbers have been reported to be on the rise, showing that local production will soon be able to increase supply to local markets, which currently still depend strongly on imports.

According to the Cambodia Livestock Raisers Association’s survey, Cambodia consumes 120,000 chickens and 8,000 pigs per day, with 20 percent of total pig supplies imported daily from Thailand.

Srun Pov, president of the Cambodia Livestock Raisers Association said that currently Cambodia imports between 2,000 to 3,000 live pigs from Thailand and Vietnam.

“Now our tourism service is closed and this has reduced demand but when the Covid-19 ends, we could face shortages so now it is important to strengthen and expand the local production,” he said.