Cambodia’s Draft Law on Investment will pass into law unchanged 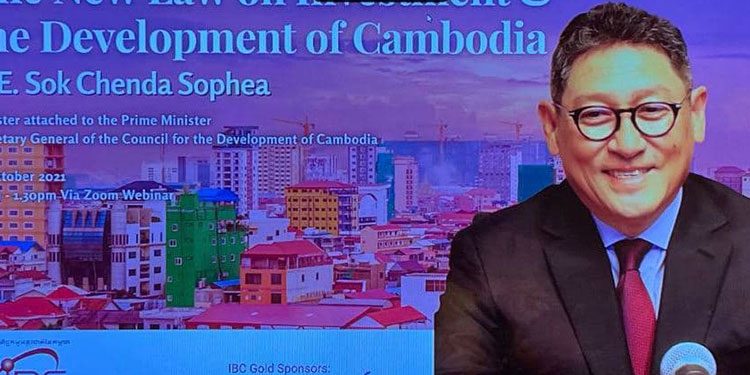 Cambodia’s Draft Law on Investment will pass into law unchanged after its approval by the Senate and Constitutional Council, according to Sok Chenda Sophea, secretary-general of the Council for the Development of Cambodia (CDC).

“The law is on its way to the right path for His Majesty the King to sign it so there will be no more change,” Sophea said, while giving his first seminar on the document yesterday.

In 1994 Cambodia adopted a Law on Investment in the Kingdom of Cambodia but Sophea said the current document is new, rather than an amendment. The initial law was amended in 2003 and from 2013 the government started considering how to make it relevant in the future. As a result it adopted the Industrial Development Policy 2015-2025, drawn up by the Supreme National Economic Council, on which Sophea serves as a vice-chairman.

Cambodia’s economy is balanced on four pillars, according to Sophea: garment exports, tourism, agriculture and construction. He said tourism and garment exports have proved very sensitive to external shocks such as the SARS outbreak, the global financial crisis and the current Coronavirus pandemic.

“Health problems that occur far away from Cambodia can impact tourism. Likewise when people living in our major markets such as the US and EU have financial and economic problems they will order [fewer] garments,” he said.

The draft was agreed last year but had to be amended to reflect the impact of the Coronavirus pandemic.

“The change of strategy. The change in the global value chains. It’s a totally new way of thinking,” he said. “This law is very relevant for investment in Cambodia in the current capacity and for the future,” Sophea said.

The current law offers nine-year tax holidays after which profits are taxed at 20 percent. Under the new law the tax is reduced to 5 percent for two years. In years three and four it goes up to 10 percent. In the fifth and six years it rises to 15 percent.

Another major change is that the new law recognises companies that spend money on items such as training, housing and transportation for staff, or invest in research and development and human resource development. They will be able to claim back 150 percent of those costs.

The CDC is a government agency responsible for the rehabilitation, development and the oversight of investment activities, chaired by Prime Minister Hun Sen. It consists of three executive boards: the Cambodian Rehabilitation and Development Board (CRDB), responsible for public investments and the coordination of international assistance, the Cambodian Investment Board (CIB) dealing with private investments and the Cambodian Special Economic Zones Board, tasked to promote and manage special economic zones.