Cambodia’s cashew is notably high demand in the international markets 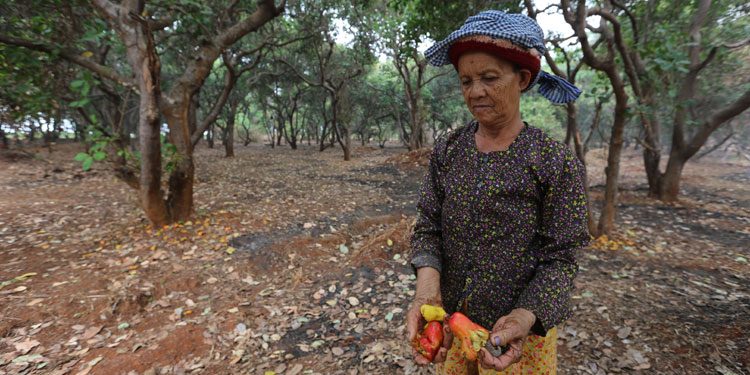 The cashew policy 2020-2025 is expected to be approved by Prime Minister Hun Sen in the first quarter next year that will bring the Kingdom’s cashew industry into the  commercialised sector internationally.

Ouk Kimsan, founder and chairman of cashew nut processing company Santana, has provided some challenges and the potential of Cambodia’s cashews.

He said the sector is notably progressing with high demand in the international markets, especially in China, Cambodia’s most important economic partner.

Kimsan said the sector is now also attracting other markets such as Japan, South Korea, the US and some EU countries.

“Vietnam, one of the main cashew-nut processing and exporting countries in the world, is also looking to purchase more cashew nuts from Cambodia to process for export as well,” he said

However, he said Cambodia’s cashew sector faces challenges such as farming or planning techniques, lack of financial support, shortage of infrastructure and finding market access.

“We will have more opportunities as long as we can produce quality and standard products and we need to create our own cashew nut standard because the product has been already recognised in foreign markets,” he said. “Our processing is still limited and we need to learn more about the sector to compete with other producing countries such as Vietnam.”

Currently Santana is investing in both growing and processing for export, where the final product is sent to China, France and South Korea as well, according to Kimsan.

“We are able to export 1,000 tonnes annually but this year, with COVID-19 and lack of finance, the company cannot buy enough cashew nuts for processing,” he said. “We provide competitive prices for farmers and higher than the price offered by brokers and this year we bought about 2,000 tonnes of fresh cashew nuts from farmers.”

Last week, the government together with nongovernmental organisations, the private sector and farmers gathered to discuss establishing the Cambodia Cashew Federation (CCF).

Kimsan said that will bring the Kingdom’s cashew nuts to international markets and it will be an opportunity for Cambodia to be a member of international cashew nut associations and the sector then will no longer depend on Vietnam.

“Now we see farmers pay more attention to the sector and I expect that within the next five years Cambodia will be able to produce at least 500,000 tonnes of fresh cashew nuts and it will be 1 million tonnes within the next eight years,” he said.

According to Kimsan, presently farmers could not produce one tonne per hectare. However, with technically-facilitated farming, they could have two tonnes per hectare.

He said the sector could help to boost the country’s economic revenue. He added if Cambodia could produce 1 million tonnes of cashew nuts a year, then about $1.5 billion in revenue could be earned for just selling the raw crop.

“And this amount does not yet include the added-value from processing. And it will create more jobs in the agriculture sector and reduce migrant workers as well,” he said.

Kimsan said the free-trade agreements (FTAs) with China and other countries will provide a huge benefit for the Cambodian cashew sector as well. “I mean that currently we don’t have an FTA with South Korea. We pay tax upto 9 percent but, when the FTA comes into effect, we hope that we will get no tariff so we will be able to increase our prices,” he said.

According to figures from the Ministry of Commerce, there are four commercial processors active in Cambodia and seven cashew communities. The combined processing was estimated at around 3,000 tonnes of raw material in 2019. However, because of installed machinery, the processors have the capacity to process up to around 25,000 tonnes per year.