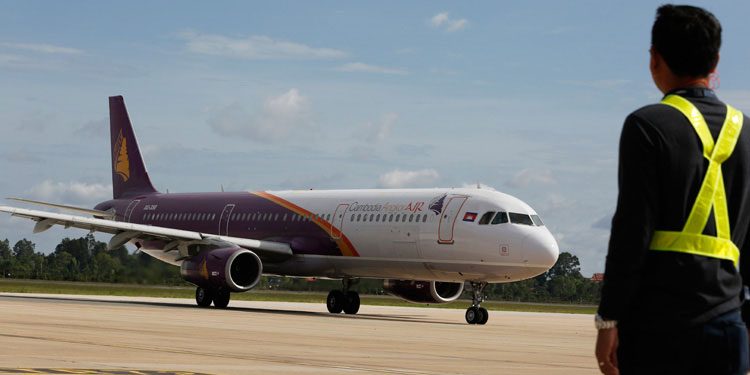 The national flag carrier, Cambodia Angkor Air says it will launch a new route from Phnom Penh capital to Zhengzhou today, the southern bank of the yellow river and the birthplace of the Yellow emperor of the China People’s Republic (CPR).

Panharidh added that the return flight number is K6 895 and will depart from Zhengzhou at an estimated time of 19:30 and arrive at Phnom Penh International Airport at 22:55 on the same day.

“The flight from Phnom Penh capital to Zhengzhou is once per week. This flight will be operated until Oct 24 and will be updated with more schedules,” Panharidh added.

He said soon the national flag carrier will operate flights from Phnom Penh to Vietnam’s Ho Chi Minh or Can Tho, a city in southern Vietnam’s Mekong Delta region. He said the company is now seeking approval from the Vietnamese aviation authority. “We are not sure which city we will be allowed to fly to: Saigon or Can Tho,” he added.

“For domestic flights, the company is operating flights from Phnom Penh-Siem Reap (REP)-Sihnaoukville, but it is not every day.”

There has been a drop in traffic of people travelling to Phnom Penh, Siem Reap and Sihanoukville airports of up to 75 percent in the last eight months, said Cambodia Airports.

There has also been a drop in cargo being flown in and out of the country by up to 32 percent, said Cambodia Airports public relations Director Khek Norinda at the three international airports. He added this year has sharply dropped because of the pandemic. “We have seen some flights start again but the resumption of air travel will be very slow. Even our domestic flights have nearly come to a standstill. For instance at Siem Reap International airport there are one to two weekly flights while no international flights have been operating there since March. The fall of freight is associated with the strong decline of commercial passenger flights: Belly-hold cargo represents a big chunk of our cargo activities.”

Around 270 whales stranded on sandbar off Australia’s Tasmania

Cambodia’s cashew is notably high demand in the international markets