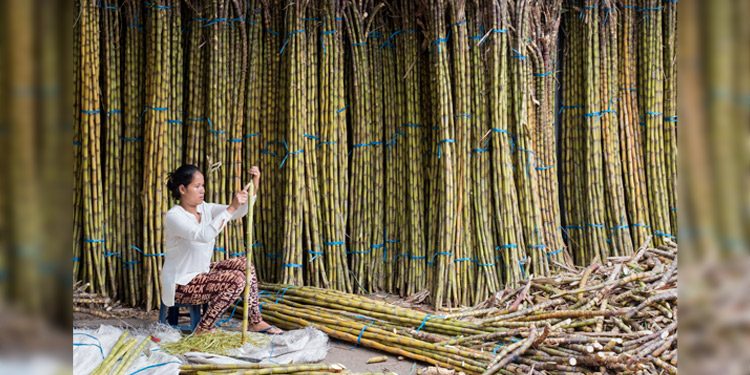 Cambodia is now capable of domestically producing up to 102,000 tonnes of white sugar per year from sugarcane grown at plantations in its southwestern provinces (Kampong Speu, Koh Kong), according to statistics released by Phnom Penh Sugar Co Ltd (PPSC) last week.

White sugar production has increased year to year since PPSC began refining it in 2013.

The PPSC factory was capable of grinding 6,000 tonnes of sugarcanes per day that year, a figure that has since increased to upwards of 20,000 tonnes per day.

The current level of sugarcane processed daily translates into the production of 102,000 tonnes of white sugar yearly post refining.

This level of production has generated jobs for 20,000 workers and farmers.

During a visit to a PPSC factory production line on Saturday last week, Minister of Agriculture, Forestry and Fisheries Veng Sakhon, expressed his full support of the company’s production chain.

Veng Sakhon encouraged the company to continue expanding the cultivation and processing components of PPSC’s production chain in order to create more jobs and increase household income in the target area because COVID-19 has hit it hard.

“While some sectors are in crisis because of the pandemic, the production chain in this factory remains an important mechanism in contributing to the development of the nation’s agro-industry, as well as the kingdom’s economy and, in so doing, creates jobs for the people of Cambodia”, he remarked.

Japan, Taiwan, South Korea among best places to be during pandemic: Bloomberg