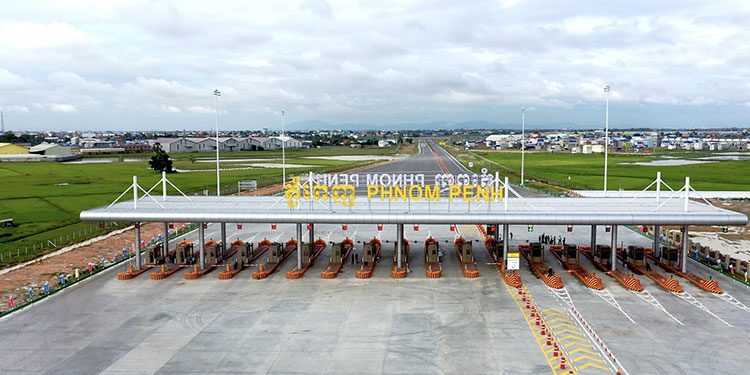 The government plans to expand several national roads as the $2 billion Phnom Penh-Sihanoukville Expressway (PP-SHV Expressway) is ready for use from 1 October 2022 to support the implementation of the Master Plan for Preah Sihanouk Province Multipurpose Special Economic Zone, according to a senior minister.

PP-SVH Expressway which will be in use for free for one month in October 2022 is expected to serve all sectors such as tourism, industry, special economic zones and ports at a more competitive cost of logistics, which is very attractive for both local and foreign investors who are eyeing Cambodia as an economically potential, the senior minister said.

Sun Chanthol, Senior Minister and Minister of the Ministry of Public Works and Transportation (MPWT), said during the last examining visit to the Phnom Penh-Sihanoukville Expressway on Wednesday that the expressway will enable the government to ready to implement the “huge” master plan that is expected to attract more tourists and investors into the Kingdom.

“The roads would allow them to travel comfortably and reach their targets smoothly and so we will be able to attract more investors as per the huge master plan … So, the government has prepared many plans … that are very realistic, knowing what to do at which step. Why are we pushing up very much? It is because it will allow us to have roads enough to support the development of Cambodia’s coastal region with the master plan,” Chanthol said.

Chanthol, who had worked in a senior executive position at the American multinational conglomerate General Electric for about 16 years, went on to add that the government also plans to expand National Road 7 to four from two lanes from Skun district to Kampong Cham city—about 47 kilometres, while the National Road 5 has been being upgraded to four to two lanes from which connects Phnom Penh Capital and Thai border.

There will be other roads to connect Battambang to Siem Reap and Kampong Chhang to Kampong Thom. “All of these are among all connectivity systems that the government focuses on in a bid to lower the costs of logistics, strengthen competitiveness, attract more investors and create jobs for our people,” he said.

The senior minister also has requested Prime Minister Hun Sen for a signature on a framework agreement that would allow China Road and Bridge Corporation (CRBC)—the PP-SHV Expressway project implementing company—to launch and conduct a study and construction of Phnom Penh-Bavet Expressway—the prospective second expressway for Cambodia after the government has decided to confiscate the right of conducting a feasibility study on the Phnom Penh-Bavet Expressway project from China Railway International Group Co Ltd (CRIG).

The government of Cambodia has decided to conduct a study and prepare a master plan to develop and transform Preah Sihanouk Province into a model multi-purpose special economic zone, as set out in the Cambodian Industrial Development Policy 2015-2025, according to MEF’s Chea Kokhong, Project Director for the Master Plan, adding that PP-SHV Expressway is among the urgent needs of the master plan for SHV development.

This master plan is the compass for developing Sihanoukville Province into a model multi-purpose SEZ and key economic pole to serve the regional production chain in order to promote economic growth, social development and environmental protection in a sustainable and continuity way. This master plan is a strategic plan with a long-term, clear and vision.