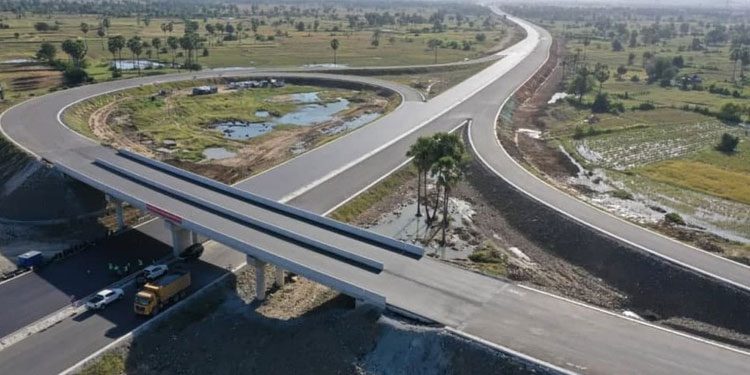 The ministry and a Chinese firm have recently reached a memorandum of understanding on the project, said its minister Sun Chanthol, who is also Senior Minister, citing that the two sides have scheduled to sign an agreement on conducting a feasibility study on the construction later in November this year.

“After the agreement signed in November this year, the firm will start conducting the study as well as prepare an agreement on concession investment before the end of this year, so that to break ground of construction in mid of 2023,” Chanthol said during leading officials to inspect the almost-completed Phnom Penh-Sihanoukville expressway on Wednesday.

Chanthol appreciated the CRBC firm for its work and experience in building the first expressway in Cambodia.

“The fast preparation [of new expressway project] is due to the fact that CRBC has experience in building an expressway, including having enough equipment and being able to properly understand the weather in Cambodia,” the Senior Minister said.

Stretching the estimated 135 km, the Phnom Penh-Bavet Expressway is designed to boost connectivity with Vietnam and spur economic ties between the two border provinces, with a special focus on export growth.

The ministry has stated previously that the expressway is planned to be 25.5m wide with two lanes in each direction.

Starting from the capital’s third ring road, the expressway will pass through Kandal, Prey Veng and Svay Rieng provinces, ending at Bavet town on the Cambodian-Vietnamese border.

“With new expressway after the first ever expressway will contribute to the logistics sector and enhance efficiency in the transportation sector in Cambodia,” Chanthy told Khmer Times on Thursday.

Previously, the government has withdrawn rights from Chinese firm – CRIG from Phnom Penh-Bavet expressway project due to the failure of filling the requirement and property study results submitted behind schedule.

The government plans to inaugurate the Phnom Penh-Sihanoukville expressway in October.

Invested by the China Road and Bridge Corporation (CRBC) through Cambodian PPSHV Expressway Co., Ltd, the $1.9-billion-worth expressway stretches over 190 kilometres connecting the capital of Phnom Penh and Sihanoukville’s deep-sea port, by crossing the provinces of Kandal, Kampong Speu, and Koh Kong.