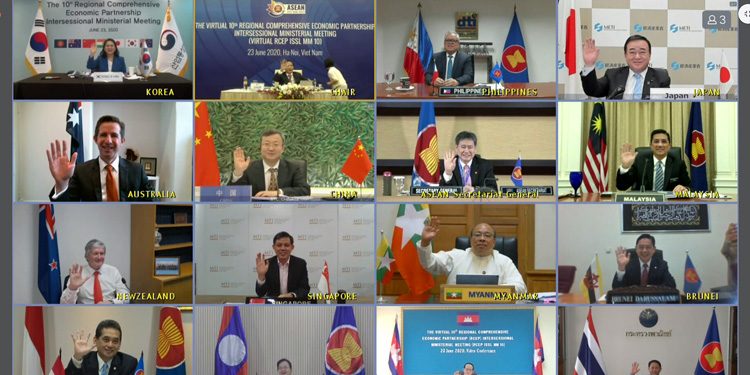 Cambodia along with 14 other regional nations have reaffirmed their commitment to signing the Regional Comprehensive Economic Partnership (RCEP) by the end of 2020, a joint media statement said.

The intentions were made during the virtual 10th RCEP Inter-sessional Ministerial Meeting chaired by the Vietnamese Ministry of Industry and Trade in Hanoi on Tuesday.

The Ministry of Commerce sent a prepared statement to Khmer Times on behalf of the 15 international trade ministries detailing their commitment to sign the RCEP Agreement this year.

“As the importance of the RCEP continues to grow in light of the ongoing COVID-19 pandemic, we shared the view that the signing of the agreement will serve as a clear signal of our unwavering support for the multilateral trading system, regional integration as well as economic development across the region,” they said.

The statement also covered India’s withdrawal from the deal, because of increased trade deficit concerns with China, adding, “India has been an important participant in the RCEP negotiations since the launch in 2012.”

“We, therefore, wish to emphasise that the RCEP remains open for India.”

The bilateral agreement is also considered a vital opportunity for Cambodia to diversify to new trading partners, especially after COVID-19’s devastating impact on Cambodia’s two major export markets the United States and the European Union, which represents about 75 percent of total market share.

Under Secretary of State for the Ministry of Commerce Penn Sovicheat told Khmer Times previously that, because of the effect COVID-19 has had and will continue to have on the nation’s biggest export partners, Cambodia is now focusing on other markets such as intra-Asean, China, Australia, New Zealand and Canada – markets that the Kingdom considers still economically viable for trade.

To achieve this, the ministry has outlined an enhanced focus on free-trade agreements (FTAs) such as the RCEP between Asean members and their partner states Australia, China, Japan, New Zealand and South Korea.

As well, the continued FTA negotiations with China  are expected to be finalised by the end of the year.

“When Cambodia graduates from its LCD (least-developed nation) status, the ministry wants to ensure the country remains competitive enough to maintain its export competency and continue to attract foreign direct investment,” he said.

“Outside the RCEP we are looking to the former Soviet bloc nations as a growing destination for our products, too.

“However, for both the African and South American markets we do not see much potential,” he added.

The agreement that was first proposed in 2012 is designed to lower trade barriers and improve
market access for goods and services, attracting foreign companies keen on entering into a more integrated region.

“If created, the trading bloc would consist of 3 billion people”

CFFA: Up to 15 percent of Cambodia logistics providers ‘heading for bankruptcy’