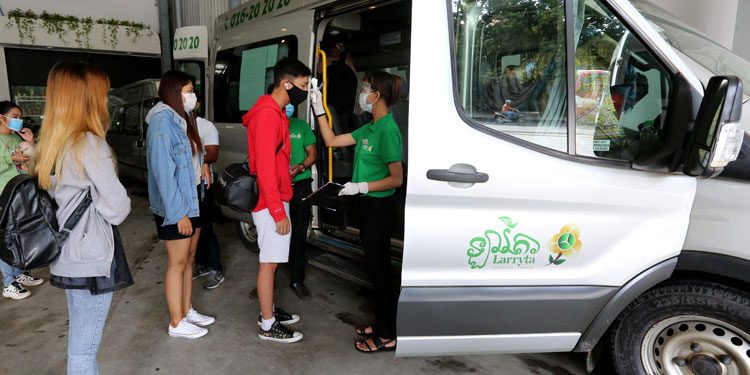 Online ticketing platforms saw a drop in revenue of up to 50 percent as borders remain closed and the domestic tourism sector isn’t making up for the loss.

Camboticket, one of Cambodia’s leading ticketing platforms, has seen a dramatic decrease in customers booking bus tickets through its ticketing site in the first eight months of the year.

Thai Sila, general manager of the company, said: “In 2019 we had around 70,000 customers book tickets through our platform but this year we have seen only 35,000. We blame it on the drop in tourism because of COVID-19.”

The drop in sales through the platform has stood out more when there were public holidays, at a time when the government was recording large numbers in domestic tourism.

It should be noted, however, that Camboticket is not the only means of booking tickets. Customers can book directly through the bus companies themselves. However, bus companies have also reported a drop in numbers of customers booking directly with them.

Larryta, one of the biggest bus companies in the Kingdom, reported a drop of 20 percent in revenue since the start of the year.

Other companies have not been so lucky and have had to close down operations altogether.

“Around 30 percent of companies have had to completely close down, while  others have had to drop their scheduled routes by up to 60 percent. For example, one company was running certain routes around 10 times per day. Now they only run four times a day,” Sila said.

With COVID-19 cases still rising in the Kingdom, albeit not as much as other parts of the world, tourism-related businesses such as Camboticket will continue to suffer.

Cambodia is part of the itinerary that travellers follow throughout Southeast Asia when passing through.

Other countries include Thailand, Vietnam, Laos and Myanmar, which will all have been substantially affected because of this year’s global lockdowns and the suspension of almost all travel, local and international.

Tourism is an industry that is essential to the economic health of Southeast Asia, contributing about 12.1 percent of the region’s gross domestic product (GDP) last year and 13.3 percent of employment, according to World Travel & Tourism Council figures.

Online travel, the bedrock of thousands of startups in the region, is now a $34 billion economy and has had an annual growth of 15 percent in the region since 2015 up until 2019.

Because of the COVID-19 pandemic, the Asia-Pacific region stands to lose approximately 63 million jobs and $1 trillion in GDP, as international tourism has plunged by up to 80 percent this year over 2019.

“I expect it to take at least one and a half to two years for international tourism to start to recover. I can only see domestic tourism improving within this period and, hopefully, that will bring the number of tickets we sell back up,” Sila concluded.

Inter Logistics (Cambodia) Co Ltd, the parent company of Wing (Cambodia) Ltd Specialised Bank, invested a significant stake in the business of Camboticket earlier this year, operated by in Sea Venture Co Ltd, in a bid to offer greater online ticket booking and holiday planning experience in Cambodia through Wing App and Camboticket.com.