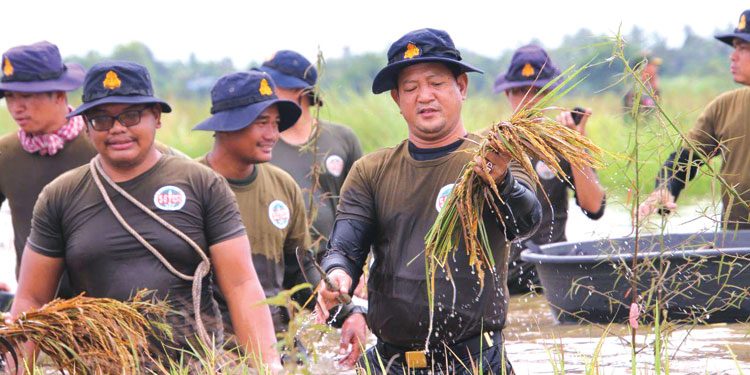 The Cambodia Rice Federation (CRF) has called on rice miller members to collect and purchase wet paddy from farmers at an affordable price after recent deluges.

CRF’s President Song Saran said some members have already purchased the paddy from farmers, especially from the most affected areas.

“We called on our members to purchase the paddy in the rice fields. Our members number nearly 100 in Banteay Meanchey, Battambang and Pursat,” Saran added. “Some areas, farmers have had to harvest the crop in the water, so we have to help purchase the wet paddy from them,” he added.

Chray Son, Chairman of Capital Food Investment Import Export Co in Battambang province, said his company has purchased around 3,000 tonnes of paddy so far from farmers as of Oct 12. “Now, there is no paddy to buy because it was flooded and farmers cannot harvest it,” Son said.

Pursat Agricultural Department Director Lay Piseth said as of Oct 12, more than 18,570 hectares of paddy fields in Pursat were affected by flooding and 4,600 hectares were damaged.

He said that if there is no more rain and flooding in Veal Veng district, in at least one week,  levels will be low because the water will flow to Tonle Sap Lake. Mostly, the paddy cultivated here is a three-month variety (three harvests a year). The most affected areas are around Pursat city and Kandieng district.

“We see the rice millers come and buy the paddy from farmers and price is good at around 1,150 riels to 1,200 riels per kilogramme,” he added.

Chhim Vichara, director of the Battambang provincial Agricultural Department, said there were more than 62,000 hectares of 350,000 hectares affected in his province while more than 46,000 hectares of other crops were also affected. He said the province has yet to evaluate the damage. The flood hit the medium and premium fragrant rice – such as Phka Romdoul.

“We cannot make any assessment on when the water will be low because now rain is still coming. Later the province will conduct an assessment on the impact,” he added. “We
are working with relevant authorities to help and evacuate people and animals to safe places,” he added.

A report from National Committee for Disaster Management of Cambodia stated that more than 120,000 hectares of farmland were affected by floods and damaged. Among the affected farmland, 80,000 hectares are paddy fields.