Cambodia Ports report big decline in profit due to COVID-19 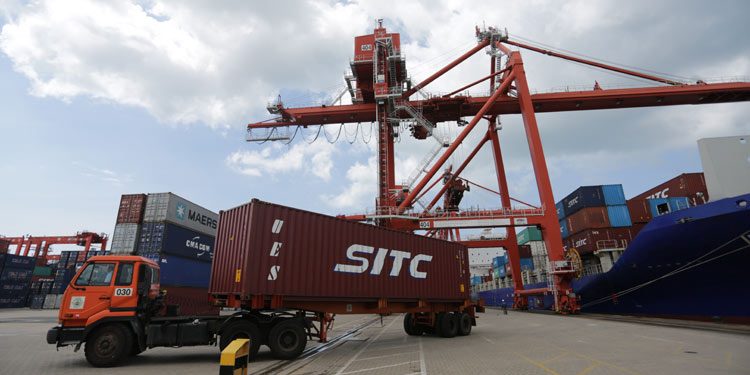 Cambodia’s two main listed autonomous ports reported a slight increase in revenue in the first quarter this year even though the Covid-19 pandemic hit global transportation hard, according to financial reports filed to the stock exchange.

However, the ports saw their profits dramatically decline during the period.

Cambodia Securities Exchange (CSX)-listed Sihanoukville Autonomous Port (PAS) reported its total revenue of $17,46 million, an increase of about 3 percent to during the first quarter, up from $16,95 million year-on-year, according to the unaudited financial report filed to stock exchange.

Another bourse-listed state-owned enterprise, Phnom Penh Autonomous Port (PPAP) saw its revenue reach $6.99 million up 20.81 percent during the period from $5.87 million, claiming it was owing to the increase of containers and retail goods trafficking via the port.

Sihanoukville Autonomous Port has reported a more than 90 per cent decline in net profit in the first quarter compared with the same period last year.

The reason for the fall in profit was because of more operational expending on port maintenance, a loss in yen foreign exchange and expected credit losses, while expenditure on taxable profit also increased, according to the reports.

A report by the Ministry of Public Works and Transport shows that the number of containers handled in the Sihanoukville Autonomous Port increased by 17 percent, to 633,099 TEUs (20-foot equivalent units) from 2018 to 2019.

The country’s only deep-sea port saw solid growth in both container and tonnage traffic in 2019 after the government expanded the port’s capacity for increasing imports and exports.

The minister of Public Works and Transport said in February that, with assistance from Japan, the government is planning to build a new container seaport in Preah Sihanouk province.

Sin Chanthy, president of The Cambodia Logistics Association (CLA), said that the viral pandemic has reduced goods transportation by up to 70 percent while the Kingdom’s air cargo has almost completely closed with just only one or two flights a week.

Most of Cambodia goods shipping via the ports are agricultural products and garment, footwear and electronic products as well as manufacturing-supported raw material products.