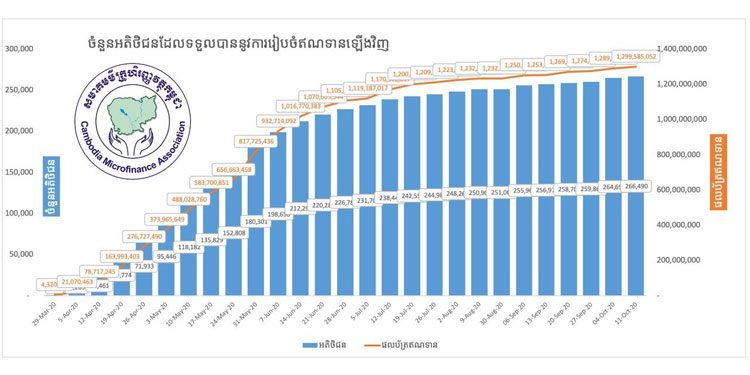 More than 260,000 applicants received approval to restructure their loans from microfinance institutions as of October.

“For the last five weeks, only 1,000 requests were made a week. We will continue to provide loan restructure as usual until the end of the year,” he added there were about 280,000 requests across the country with 260,000-plus approvals. “The loan total is $1.3 billion. It is going down now,” Tongngy added.

“We will continue to provide loan restructuring as usual until the end of the year. We are now discussing with members and stakeholders about the possibility of extending loan restructures to 2021, especially in the tourism sector, which is still struggling now,” Tongngy added.

He said non-performing loans (NPLs) for the whole financial industry including banks increased from just above 1 percent in the early part of the year to 2.5 percent now, but this is considered healthy by global standards. However, NPLs with microfinance institutions (MFIs) stood at 2.7 percent in August.

PRASAC’s Executive Vice-President and Chief Marketing Officer Say Sony agreed  requests for loan restructures have been declining, but he did not give details about individual MFIs.

Regarding extending loan restructuring, Sony said the company will follow guidelines from the National Bank of Cambodia.

“There are a few clients who have failed to pay back loans because of recent flooding,” Sony added. However, he said the institution still keeps lending to clients who are affected by flooding if they need money to restart their business. However, we do hope that most  agricultural production will increase in yield because there is enough water.

When asked whether there are any write-offs of loans because the debtors cannot pay back money owed, especially during the natural hazard of flooding which caused the farmers’ crops damage, Sony said there is no plan yet because the institution still sees a high credit discipline among clients with strong commitments to repay their loan, “So we must consider matters carefully because if we write off their loans it will affect their credit history so we have to work harder together to deal with this difficult situation.”

However, Tongngy said that there is no data concerning the impact on MFI’s customers who suffered flooding because it is at an early stage, but the MFIs have an existing policy to protect  customers when they experience natural hazards.

“The CMA is monitoring the impact of the flooding. If we find the natural disaster is huge, we will issue another urgent mechanism to the victim, but we have received some figures from the Ministry of Agriculture that the impact is less than last year,” he added.

Cambodian Prime Minister Hun Sen yesterday posted on his official Facebook page that the country is strengthening agro-industry during the COVID-19 crisis. At a time when the COVID-19 crisis is spreading around the world, a number of sectors have been affected. However, agriculture and the agro-industry sector is still the most important sector in strengthening the Cambodian national economy.

“Indeed, we need to turn the crisis of COVID-19 into an opportunity for investment as well as further development of the agro-industry sector for the future development and growth goals of Cambodia,” the prime minister added.