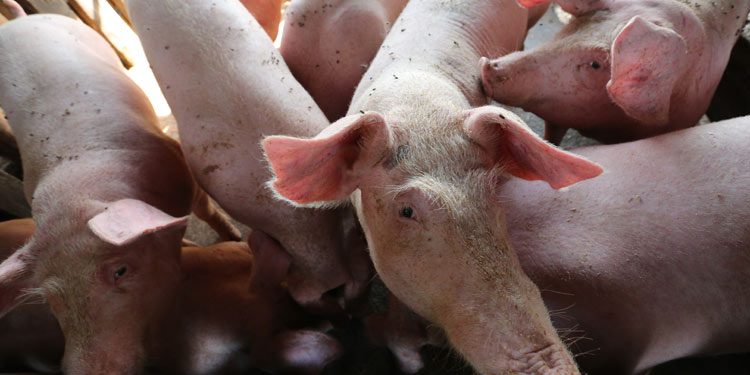 The government has reduced the import of live pigs from neighbouring countries by up to 70 percent to support local farmers to increase their production, according to a senior official of the General Directorate of Animal Health and Production.

Tan Phannara, director-general of the General Directorate of Animal Health and Production at the Ministry of Agriculture, Forestry and Fisheries, said at a news conference yesterday that at present there are six companies allowed to import live pigs from neighbouring countries, mainly from Thailand.

He said 1,800 to 2,100 live pigs per day were imported from Thailand. He added that each company is allowed to import 300 live pigs.

The reduction of the imported live pigs from neighbouring countries is because the Cambodian farmers can produce enough for the domestic market. It is also to stabilise the price of live pigs in order to help the farmers.

Moreover, on Feb 18, Prime Minister Hun Sen called on farmers to increase livestock production to supply the local market and increase food security during the COVID-19 pandemic. Now the supply of local live pigs has reached about 82 percent, so there only 18 percent are imported from neigbhouring countries.

The demand for live pigs in the Kingdom is 2.3 million per year – about 8,000 per day. Local farmers can supply up to 6,000 live pigs per day into the market, according to Phannara.

“To support the farmers’ livelihoods, to stabilise pig prices in the local market, to reduce migration and to support local companies to produce live pigs for the market, the government decided to reduce imported live pigs by up to 70 percent,” said Phannara.

“In addition to this, the ministry will not allow the transit of any imported live pigs from Thailand to Vietnam,” he said.

Phannara added that the government will also ban imported live pigs to Sihanouk province as requested by the Cambodia Livestock Raisers Association because the farms there have enough capacity.

Srun Pov, president of the Cambodia Livestock Raisers Association, welcomed the government’s move. He said that reducing imported live pigs from neighbouring countries would assist local farmers to raise more pigs to supply the local market. He added that it is also helping to generate jobs for locals and reducing migration.

A representative of M’s PIG ACMC (Cambodia) Co Ltd supported the government’s intervention to ban the import of live pigs to Sihanouk province and to reduce imported live pigs from other countries.

He said that M’s Pig has a big farm in Sihanouk province, so the company can supply enough live pigs to the market daily. The demand is only 140 live pigs per day, which the company can fulfill. The company now is increasing production to supply the local market.

“We do not use chemicals with our pigs [such as growth hormones] so it is safe for people to eat,” he said. He added that he supports the government to limit the quota of imported live pigs from neighboring countries.

Facebook to help retailers create online stores if they are hurting