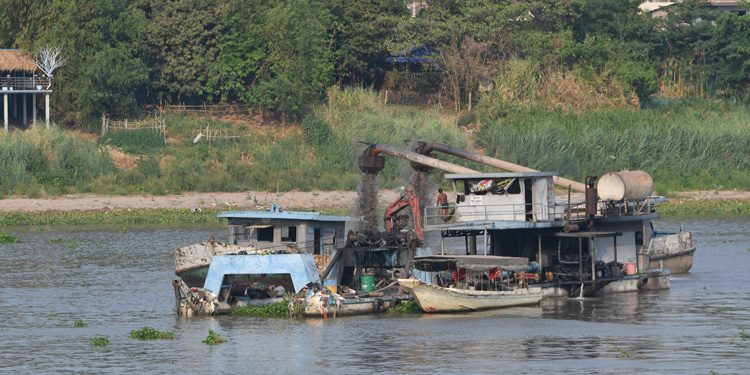 The government has issued a prakas (directive) on controlling and managing the use of construction mining resources and the revenue for any government infrastructure projects.

The joint prakas by the Ministry of Economy and Finance (MEF) and the Ministry of Mines and Energy (MME) on “controlling and collecting royalty revenue from the resources”, dated June 23, stated that the government aims to better control the operation of mining resources and revenue collection. The resources include rocks, sand and soil.

According to the parkas, the state-owned development infrastructure projects include roads, bridges, irrigation systems and power stations.

“Project developers both state-owned and private who use their own resources must have a mining licence issued by the MME and need to pay a royalty fee as set by the ministry,” it said.

The company or developer also needs to apply for a mining licence at the Ministry of Mine and Energy or a provincial mine and energy department before the project can start. The licence can be approved within 45 days.

In the case of the resources being supplied from the market, the company needs to buy from licensed suppliers because the ministries said the prakas was drawn up to ensure transparency in controlling and collecting the royalty revenue from the resources.

Pech Pisey, an executive director of Transparency International (TI) Cambodia welcome the move, saying that the government’s measure is good.

He said Cambodia did not have legal instruments to control and manage the royalty revenues in general before and it comes at the right time because gold mining is starting to generate revenue for the nation.

He said TI Cambodia and key partners have been advocating for relevant legal and regulatory frameworks to safeguard and ensure transparency and accountability in the mining sector for many years.

“So this is a welcome step in the right direction. However it’s crucial to ensure the effective implementation of the prakas and curb corruption in all steps of the mining licensing, mining extraction and revenue distribution,” he said.

Pisey said the government and companies have obligations to ensure transparency and accountability in financial management of the revenue which is generated from mining resources in Cambodia.

“I applaud the MME’s leadership for this effort and encourage the MME to continue to collaborate with key stakeholders such as mining companies and CSOs (civil society organisations) through the existing Extractive Industry Governance Forum (EIGF) to promote transparency, accountability and curbing corruption in the mining sector in Cambodia,” he said.

He said as Cambodia is facing the impact of COVID-19, revenue from the mining sector can contribute to a financial gap which the government is currently facing.