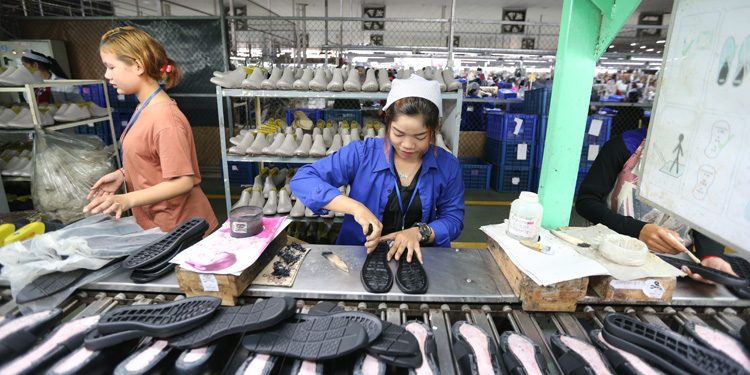 Three associations in the garment, footwear and travel goods and commerce yesterday once again sent a letter to the European Parliament appealing to postpone the scheduled partial withdrawal of the Everything but Arms (EBA) trade preferences.

The letter’s title, “Impact of COVID-19 Pandemic on Cambodian Garment and Footwear Sector”, was sent by the Garment Manufacturers Association in Cambodia (GMAC), the  Cambodia Footwear Association (CFA), and the European Chamber of Commerce in Cambodia (EuroCham).

The effective date of the partial withdrawal of Cambodia’s EBA trade benefits starts on Aug 12 and will last a year. The EU’s decision came before the devastating impact of the COVID-19 pandemic.

The associations asked Chair of the European Parliament’s International Trade Committee, Bernd Lange, to delay the withdrawal until a full impact assessment can be made both of it and the pandemic.

The letter from the associations said that since the beginning of the pandemic, some 400 factories in the Cambodian apparel, footwear and travel goods sectors have had to suspend operations, with most others operating at reduced capacity. In excess of 150,000 workers in the sector, most of whom are women, have already lost their jobs.

The Cambodian, garment, footwear and travel goods sectors are the largest employer in Cambodia and support about 1 million workers and their families.

This number is likely to rise sharply in the coming weeks. The decision in February was made without any awareness of the coming impact of the COVID-19 pandemic,” said GMAC’s Secretary-General Ken Loo.

“We are asking that the European Union take a reasonable time to consider that impact now,” he added.

Secretary-General Ben Kao of the Cambodian Footwear Association said that the European Union through the EBA has removed itself of its largest market for footwear.

“Our factories and workers have suffered enormously from the pandemic and many are trying to survive until demand, hopefully, resumes later in 2020. A second blow from the withdrawal of EBA benefits could be one that most factories will not be able to sustain,” he said.

Arnaud Darc, chairman of the European Chamber of Commerce in Cambodia, said because the European Union is Cambodia’s largest trade partner, he very much hopes the European Commission will reconsider its EBA recommendation to the EU.

“We strongly feel that sticking to the EBA removal calendar will be counterproductive to Cambodia’s socio-economic transformation and will have a terrible impact on the employment of hundreds of thousands of Cambodians –mostly women and many more of their dependents,” he said.

The EBA decision was made because of alleged serious and systematic violations of the human rights principles enshrined in the International Covenant on Civil and Political Rights.

The withdrawal amounts to around one-fifth – about $1.1 billion – of Cambodia’s yearly exports to the EU.

Ky Sereyvath, an economist and researcher at the Royal Academy of Cambodia, said he believed that the EU will postpone the partial implementation of the EBA trade preferences.

He said that if the EU withdraws part of the EBA deal from Cambodia, it will kill their people. It also means that the apparel, footwear and travel goods exported to the EU will increase in price at a time the EU is also facing the COVID-19 crisis.

“When the people do not have an income and the price of goods is increasing, the people of the EU will have a serious issue,” Sereyvath said.