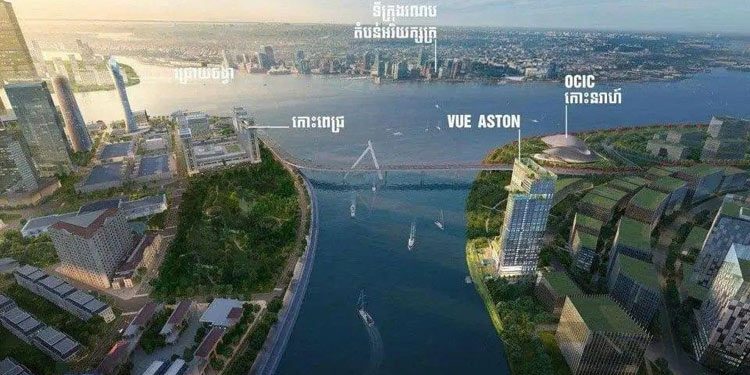 The plan was disclosed in a letter issued by City Hall sent to the Ministry of Economy and Finance, seeking approval in principle for tax relief in importing construction materiala and machinery to build the bridge.

OCIC – one of the locally-owned largest finance, infrastructure, construction and real estate developers – is also developing a new modern city in Koh Norea.

The letter added the equipment and machinery will cost roughly $40.8 million and soon will be transported to Phnom Penh through international border checkpoints. Taxes for the imported equipment are said to be borne by the government.

“The bridge will help ease traffic congestion once it opens to the public,” it said, adding that the government granted permission in principle for the firm in October 2018 to develop Norea adjacent to Diamond Island.

Neither OCIC’s deputy Touch Samnang nor a spokesperson for the City Hall responded when asked for further details. But Samnang was previously quoted as saying that the new development project in Norea will occupy approximately 100 hectares of land and the firm is building out the area into the water. The project is set to be another new modern city in Phnom Penh with an estimated cost of about $2 billion.

Kinkesa Kim, manager of research and consulting at leading real estate firm CBRE, told Khmer Times yesterday that the bridge will improve the connectivity between the inner tier of Phnom Penh and Chbar Ampov district, while also expecting to ease the traffic at the bottleneck on Monivong Bridge.

“The improvement in accessibility doubled with the satellite city development will attract more high-rise development into the Koh Norea area, which is relatively low-rise at the moment,” she said.

The average land prices in the area, according to Kinkesa, are anticipated to substantially increase from the current rate of $800 to $1,300 per square metre, especially along the riverfront. “This trend of developments is commonly seen in developed cities such as Bangkok and Ho Chi Minh,” she said.

Po Eav Kong, CEO of Advance Real Estate, said yesterday that once the bridge link realised, it will certainly boost the potential of Norea, noting it will eventually attract residential housing developments and condominium investments.

“I think OCIC may take some time to develop its project’s [Koh Norea] infrastructure and after the next three years we might see some building structures appearing,” he said.

Kong added that for the time being the project would not much boost the potential of the area and if the project is to be realised within the next three years, there will be substantial investment in the area.