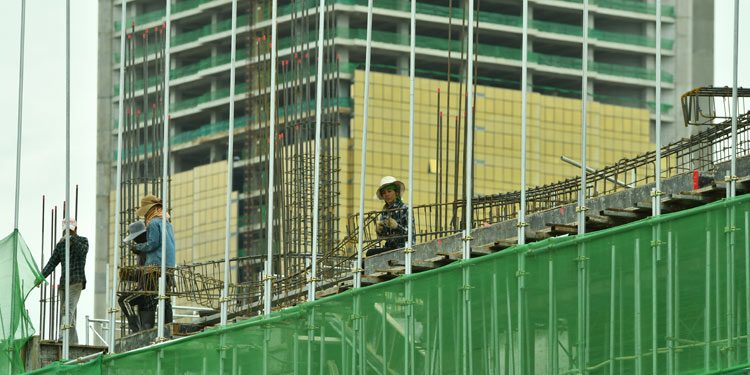 The Cambodia Construction Association (CCA) has said that the nation’s construction activity has slowed down considerably over the last two months as 90,000 workers have fled sites for fear of COVID-19 infection.

Chiv Sivpheng, general manager of CCA, told Khmer Times that as a consequence, many projects are temporarily delayed. These include the investment projects approved by the government during the first three months of the year, which represented a 51 percent increase on the same period last year.

However, Sivpheng is confident the sector, which usually employs 300,000 construction workers, will quickly rebound.

“It’s not an economic issue for the developers, but rather a social-distancing issue,” he said.

In 2019, the construction and real-estate sector garnered investment worth approximately $11 billion, a 90 percent rise on 2018’s figure of $5.5 billion.

But the World Bank has warned that the significant growth recorded in the construction and real-estate sector, considered one of the country’s economic pillars, could ultimately affect overall growth due to a trinity of unanticipated and now negative factors. These are a local COVID-19 outbreak, a prolonged decline in tourist arrivals and real- estate market correction.

Chrek Soknim, president of the Cambodian Valuers and Estate Agents Association said yesterday that the big projects will continue but at a slower rate of progress due to the current lack of labour.

“It is a big challenge for the construction sector, especially because the local projects play an important role in boosting the overall economy,” he said.

The sector is also being impacted by the closure of borders between Cambodia and its neighbouring countries, hampering the import of construction materials.