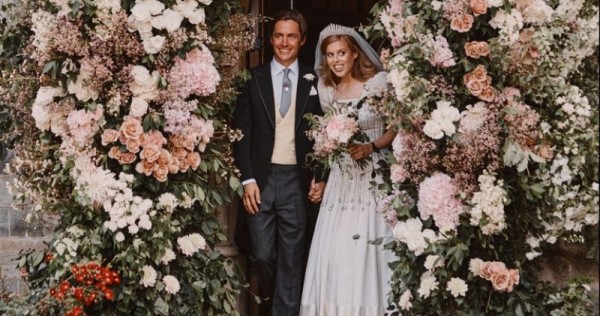 LONDON – Princess Beatrice wore the same tiara as her grandmother Queen Elizabeth at her wedding this week, Buckingham Palace said, releasing more details about the surprise, private ceremony that was scaled back because of the coronavirus pandemic.

With little of the usual royal pomp and fanfare, the 31-year-old Beatrice married Edoardo Mapelli Mozzi on Friday (July 17) at Windsor Castle.

She is the eldest daughter of Prince Andrew and Sarah, Duchess of York.

The couple had originally planned to marry in May, but the coronavirus lockdown forced them to reschedule and have a low-key ceremony.

The 94-year-old monarch and her husband Prince Philip, 99, were among the few who attended. Wedding ceremonies have been allowed in England since July 4 but with a limit of 30 guests.

📷 The happy couple are pictured with Her Majesty The Queen and The Duke of Edinburgh. Photograph by Benjamin Wheeler. pic.twitter.com/Ztw1Kk0eRy

“The couple decided to hold a small private ceremony with their parents and siblings following the postponement of their wedding in May,” the palace said in a statement.

British media said the “secret” wedding would have been the first time that the queen had seen her second son Andrew, 60, since his friend Ghislaine Maxwell was arrested in the United States.

Maxwell is charged with luring young girls for late U.S. financier Jeffrey Epstein to sexually abuse, accusations she denies. US prosecutors also want to question the British prince about his contacts with Epstein but say he has so far evaded their requests, an allegation he rejects.

Princess Beatrice wore a vintage dress by Norman Hartnell and the Queen Mary diamond fringe tiara, both belonging to Her Majesty The Queen.

The tiara was worn by Her Majesty on her wedding day in 1947. pic.twitter.com/LEXLdsSlW1

Buckingham Palace said Beatrice, who is ninth in line to the throne, wore a vintage ivory dress by Norman Hartnell and the Queen Mary diamond fringe tiara, both loaned to her for the day by the queen.

Elizabeth wore the same tiara, made in 1919 from a diamond necklace given to Queen Victoria for her wedding, when she married Philip in 1947.

“Working within government guidelines, the service was in keeping with the unique circumstances while enabling them to celebrate their wedding with their closest family,” the palace said.

“No hymns were sung, but a selection of music was played. The National Anthem was played but not sung.”