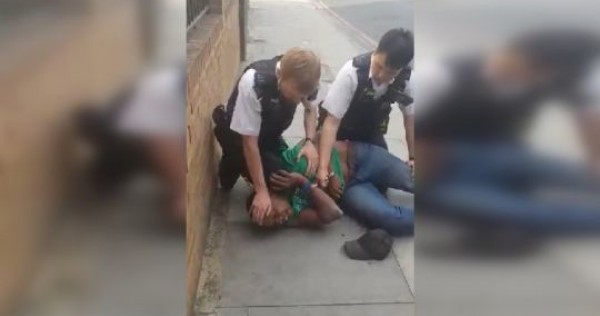 LONDON – London’s police force suspended an officer on Friday (July 17) after video footage emerged of him appearing to kneel on the head and neck of a Black man they had detained who cried out, “Get off my neck!”

Britain’s capital and other major cities have seen large Black Lives Matter protests inspired by concern about racial injustice following the death of African-American George Floyd in police custody in Minneapolis on May 25.

“Some of the techniques used cause me great concern – they are not taught in police training,” Metropolitan Police Deputy Commissioner Steve House said in a statement about the incident.

“The video footage that I have seen today and is circulating on social media is extremely disturbing.”

Reuters was not able to independently verify the video.

The Metropolitan Police referred the incident for investigation by the independent police watchdog for England and Wales.

London Mayor Sadiq Khan called for a swift and thorough inquiry into what he described as a “distressing” incident.

Late on Friday, the Metropolitan Police said the 45-year-old man they arrested had been charged by prosecutors with possession of a knife in a public place, and would appear in court on Saturday.

The man was also wanted for recall to prison for a separate offence, police added.

Knife crime has risen rapidly in Britain in recent years, even as other violence has fallen, and a disproportionate amount takes place in London, where 86 people were killed in knife attacks in the year ended in March.

Video filmed by an onlooker showed one white police officer appearing to kneel on the side of the man’s head and neck, while another officer of east Asian ethnicity helped to restrain the man on the ground.

The white officer stopped kneeling on the suspect after he protested at his treatment, and the man was later shown sitting up and speaking with the officers while in handcuffs.

A bystander told the officers that the man they were arresting had not attacked anyone.

Nick Thomas-Symonds, the opposition Labour Party’s spokesman for home affairs, welcomed the suspension and said police needed to show “the highest levels of respect and professionalism”.