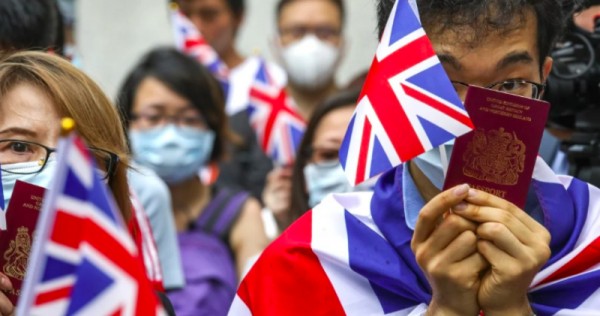 Millions of Hongkongers eligible for British National (Overseas) passports, their spouses and underage children will be allowed to resettle in the UK and given a path to British citizenship, Prime Minister Boris Johnson said yesterday.

The historic change to the rights of Hongkongers born during the colonial era was announced hours after China officially imposed a sweeping national security law on Hong Kong.

“The enactment and imposition of this national security law constitutes a clear and serious breach of the Sino British Joint Declaration,” Johnson told Parliament.

Foreign secretary Dominic Raab told Parliament that holders of BN(O) passports would have the right to remain for five years after which they can apply for settled status – effectively giving them permanent residency.

After 12 months of settled status, they can apply for citizenship. Raab added: “There will be no quotas on numbers.”

“This is a special, bespoke set of arrangements developed for the unique circumstances we face and in light of our historic commitment to the people of Hong Kong,” Raab said.

Crucially, the two did not repeat previous references to “extendable periods of 12 months” during the five-year period.

Whether that means BN (O) holders will be relieved of the need for annual renewals, as previously suggested, remains to be seen in detailed proposals to be outlined by home secretary Priti Patel.

The foreign office said the new policy would be implemented in the coming months, with the exact date and further details to be announced in due course.

It added: “In the meantime, we will ensure BN (O) citizens who wish to come to the UK will be able to do so, subject to standard immigration checks.”

As of February, there were 349,881 holders of BN (O) passports and the British government estimates around 2.5 million, who used to hold the passports, are eligible to apply for them..

The policy change was announced on the first full day of the enactment of the national security law in Hong Kong, with police using it against those who waved flags they considered secessionist.

“It’s heartbreaking to see the scenes in Hong Kong just hours after the enactment of this national security legislation,” Raab said.

“We are counselling the Hong Kong authorities and Beijing to step back, but it’s clear having enacted this legislation that they wish to proceed.”

The Sino-British Joint Declaration, signed in 1984 by prime minister Margaret Thatcher and premier Zhao Ziyang, laid out the terms of the handover after a century and a half of British colonial rule.

It also guarantees the city’s rights and freedoms under the “one country two systems” formula.

China previously said Britain’s move to change the status of BN O)s would breach the Joint Declaration – even though Beijing has repeatedly described it as a historical document that no longer has any practical significance.

“All Chinese compatriots residing in Hong Kong are Chinese nationals, whether or not they are holders of the British Dependent Territories Citizens passport or the British National (Overseas) passport,” foreign ministry spokesman Zhao Lijian in May.

“We made clear … if China continued down this path, we would introduce a new route for those with [BN (O)] status to enter the UK, granting them limited leave to remain, with the ability to live and work in the UK, and thereafter to apply for citizenship” Johnson said. “And this is precisely what we will do now.”

Their dependents, including spouses and children under 18, will also be allowed to go with them. It remains to be clarified what rights to work or study in Britain they have.

Raab’s office spent the night going over the legal text released by Beijing – which was only available in Chinese – before he attended the parliamentary session.

The foreign secretary outlined four areas in which the UK believed the Joint Declaration had been breached.

The imposition of the legislation by Beijing, he said, was “in direct conflict” with Article 23 of Hong Kong’s Basic Law, which affirms that Hong Kong should bring forward its own national security legislation.

The new law also “contains a slew of measures that directly threaten the freedoms and rights protected” by the 1984 declaration, he said, citing the “potentially wide-ranging ability of the mainland authorities to take jurisdiction over certain cases, without any independent oversight, and to try those cases in the [mainland] Chinese courts”.

The power of the Hong Kong Chief Executive, rather than the Chief Justice, to appoint judges to hear national security cases “clearly risks undermining the independence of Hong Kong’s judiciary”, Raab continued.

Finally, he said, it was “particularly worrying” that the Chinese government was going to set up a new office for safeguarding national security in Hong Kong “run by and reporting to the mainland authorities”.