Bird-watching tourism is a new opportunities for Cambodia tourism industry 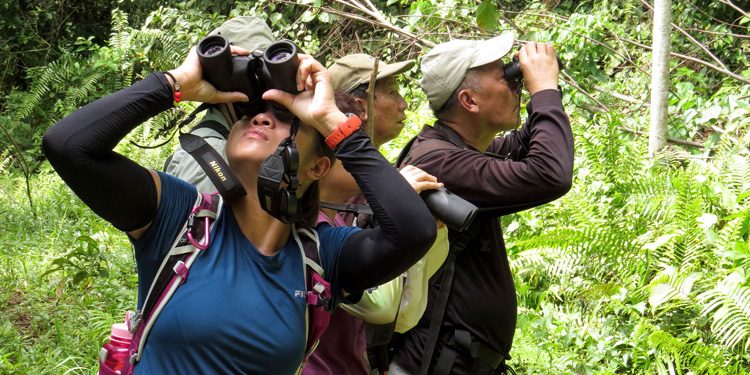 Although the pandemic is not yet over, tourism industry stakeholders are keen to kick-start the sector in 2021. With COVID-19 remaining a threat though, the prospect of thousands of tourists flooding Angkor Wat and the Kingdom’s coastlines is neither plausible or advisable.

This has the industry looking to diversify Cambodia’s tourism offerings to ones that will work in the new-normal. Increasingly they are looking at niche sub-sectors such as nature-based tourism alternatives. Among these is avitourism – or bird-watching, also known as ornithology.

According to the Center for Responsible Travel (CREST), bird-watching is among the fastest-growing trends in ecotourism, one from which tropical and developing countries are well-positioned to benefit.

“Avitourism is good for diversifying tourism product, minimising the effects of seasonality and reducing the pressure on ‘honey pot’ areas by distributing tourists to less-visited places,” it said.

Although avitourism offerings are still developing in Cambodia, a report by Bird Life International (BLI) said countries that actively promote themselves to birdwatchers have been successful in attracting high-spending, long-staying tourists.

“For instance, the Costa Rican Tourism Institute – which heavily promotes avitourism – has estimated  41 percent of its $1 billion tourism revenue comes from tourists who visit primarily for the purpose of bird-watching,” BLI said.

Experts say that promoting avitourism at any level can put developing countries firmly on the map.

“Like backpackers, bird-watchers are often the first travellers to open up a destination to the international market,” CREST said.

“Hard-core birders are driven and laser-focused in their pursuit of certain species for their life lists. Given their passion, many are willing to travel to remote and less-developed locations. As word spreads about birding in a new destination, others will certainly follow.”

It also added those involved in avitourism tend to be interested in sustainable tourism.

“Therefore, bird-watching can provide a financially sustainable means of habitat protection. This translates into a real business opportunity for expanding nature-based tourism in developing countries. Businesses that incorporate protection of both resident and migratory birds can differentiate themselves from their competitors, becoming more attractive to regional and international tourists sensitive to environmental and ecological issues,” said CREST.

The Cambodia Bird Watching Association (CBWA) says the Kingdom offers some of the best habitats and species for avitourism and in turn reaps wide-reaching community and environmental benefits from international bird-watching visitors.

“From the giant ibis to the white-shouldered ibis, greater adjutant and the red-headed vulture, Cambodia is home to 600 species of birds, some of which are found in higher concentrations in Cambodia than other bird-watching destinations. These birds attract a lot of international visitors to Cambodia each year to popular sites such as Prek Toal, Tonle Sap, Tmatbeoy and Boeng Toal.”

The CBWA said bird-watching, and the visitors it brings, plays an important role in conservation, livelihood development and environmental protection.

“Bird-watching tourism brings a unique combination of benefits, including the development of income streams for people living in rural conservation areas. This in turn funds infrastructure development in rural villages, forest-patrol activities and especially nest-protection schemes, as well as allowing pond-deepening projects to secure water and food sources for wildlife and supporting bird-feeding programmes for endangered species,” it added.

“Also, bird-watchers often require an overnight stay, transport, food and a local guide among other things, all of which create income opportunity.”

Speaking at the second Cambodian Bird Expo Day, organised under the theme “bird-watching linked to ecotourism”, Ministry of the Environment Director-General of Environmental Knowledge and Information, Chuop Paris, said bird-watching plays an important role in the growth of ecotourism.

“[Avitourism] improves the livelihoods of local communities and has contributed to the protection and conservation of natural resources, as well as social development. Protected areas of Cambodia have great potential to become [bird-watching] areas that can attract domestic and international tourists,” he added.

But the real good news for Cambodia is that the trend is essentially pandemic-proof.

By its very nature, ecotourism is most cohesive with current virus measures, said Tony Charters, board member of the Asian Ecotourism Network and vice-chair of Global Ecotourism Network in an interview with TGGAsia, a regional leading travel trade industry news source in newspaper and online form.

“For ecotourism, the new normal is actually the old normal,” he said.

Charters added: “In some ways, ecotourism is the leader in what the new normal is because it is run in a very different way by-and-large from many of the other mass-tourism products, adopting practices that are much safer from environmental and health points of view than many other forms of tourism. The experiential side of ecotourism is very important and often you will find that many different ecotourism activities such as bird-watching, hiking and canoe treks go on in quite remote areas where the risk of COVID-19 transmission is minimal.”