Bilateral trade between Cambodia and US stays strong 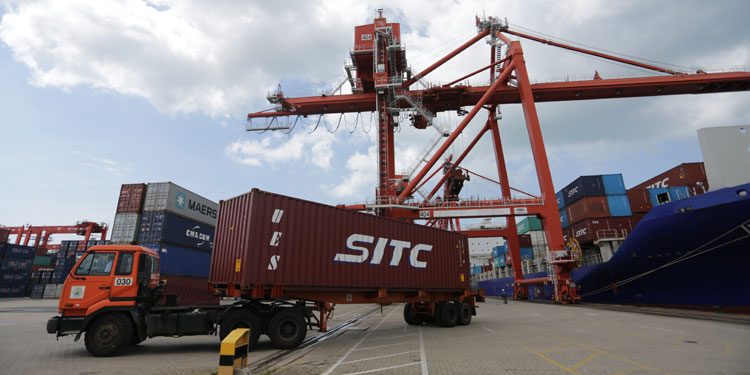 Two-way trade between Cambodia and the US has remained strong even during the COVID-19 pandemic, a situation the government is hoping continues.

According to statistics from the US Census Bureau, from January to September the bilateral trade reached more than $5 billion, an increase of 16 percent compared with the same period last year.

The report shows Cambodia exported $4.8 billion worth of products to the world’s largest economy, up 21 percent from the same period last year, while it imported goods worth a total $232 million during the period, down 40 percent year-on-year.

Public Affairs Officer of the US Embassy to Phnom Penh Arend Zwartjes told Khmer Times by email that Cambodia has benefited greatly from duty-free access to the US market through the Generalised System of Preferences (GSP) programme.

He said travel goods (luggage, handbags and backpacks) are among Cambodia’s fastest growing exports to the United States, with exports of them increasing from $50 million in 2016 to nearly $1 billion in 2019 after being added to the GSP.

“The United States is Cambodia’s largest single export market. We continue to work with the government and private sector here to promote sales of more US products to ensure more balanced trade for the benefit of both countries,” he said.

Undersecretary of State and spokesperson at the Ministry of Commerce (MOC) Penn Sovicheat said that Cambodian exports to the US market so far have
not been severely affected by COVID-19.

“All products exported to the US market show a positive trend,” he said.

“COVID-19 has affected some areas but the US market is going well and, at the MOC, I have recorded the number of certificates of origin, which are still increasing.”

According to an MOC report, from January to September this year, Cambodia exported more than 1.5 million bicycles to foreign markets, generating nearly $400 million. Half a million bicycles were sent to the US market.

Sovicheat said after the pandemic ends, market demand will increase, boosting the volume of orders from Cambodia.

The Kingdom’s exports from the garment sector to the international markets dropped more than 5 percent to around $3.78 billion in the first half of the year, according to figures from the Ministry of Labour and Vocational Training.

The drop was mostly in the EU market, where the sector has lost 20 percent of the trade preference known as Everything but Arms (EBA), adding to the impact of COVID-19

However, the government said the partial loss of the EU’s EBA is not a huge concern because authorities are working to diversify market destinations.

“I would not like to talk about EBA, but notably we see no big change in the EU market because we can still export there as normal but with just less profit than before,” he said. “It’s not a headache issue when compared with COVID-19 because the MOC has strategies to open new markets and negotiate for market diversification, so we depend on our new markets.”

Sovicheat said the government is still optimistic because Cambodia specialises in producing garment products that buyers trust. “We still have options to offset the loss  [of 20 percent of the EBA deal] because producers will shift to other products that are not taxable,” he said

Last year, bilateral trade between the two countries reached $5.9 billion, a year-on-year increase of 37 percent. The exports of travel goods and bags under the GSP are expected to rise to about $1 billion in 2020 while the number of factories producing the products has increased to 101 so far.

Over 1.5 million units of Cambodian bicycles have been exported in first nine months