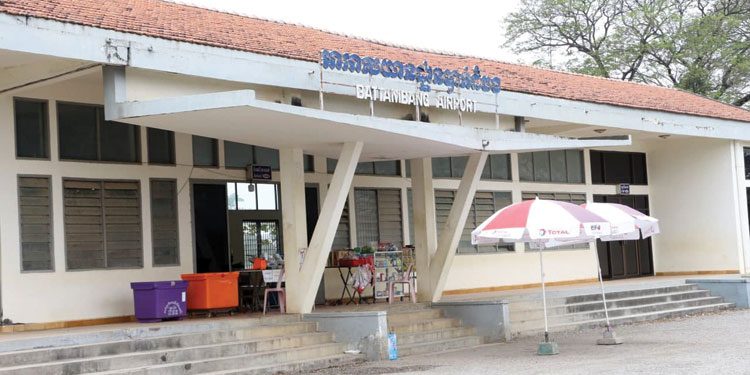 0
SHARES
13
VIEWS
Share on FacebookShare on Twitter
The process towards rebuilding the abandoned Battambang Airport has started with a national technical working group busy with preparing their plan and conducting studies on the social, economic and environmental impacts of the rejuvenation of the airport, according to an official from the State Secretariat of Civil Aviation (SSCA).

SSCA’s Undersecretary of State Sin Chansereyvutha, said that while the preliminary study indicates impact costs of around $7 million, [there remains substantial work to be done]. “The impact is not easy to assess as we need to ascertain verification of
[all pertaining] issues,” Chansereyvutha added.

He said that revitalising the abandoned Battambang Airport would be achieved with private sector investment, since the government wants to reduce state activity in the airport business, while continuing to act as a regulator overseeing the sector.

The airport is three kilometres from the city centre of Battambang and has a total land area of 128.68 hectares. The runway length is slightly more than 1,600 metres with a width of 34 metres.

Battambang provincial governor Nguon Ratanak, said the project is now under study. He added that there are a number of long-term residents living in the areas adjacent to the airport, with that issue under review by the SSCA’s national working group.

Ratanak did not disclose when the studies will be completed, or how much the project would ultimately cost. However, he did note the potential of the re-opening of the airport in bringing more tourists to the province.

The plan to rebuild the abandoned Battambang Airport came following a call made by Prime Minister Hun Sen during his speech at the 6th River Festival earlier this year. He wants the airport to undergo renovation because the province boasts great tourism potential.

The airport was initially launched in 1968, but was limited to serving small-scale domestic flights. Battambang Airport took a downward turn in 1975 upon the onset of the Khmer Rouge regime. The small airfield was reopened following their defeat and was used for civilian aircraft until the end of the 1990s, but it never returned to full operational status.

But now, with times having changed, the government has launched studies to respond to and capitalise on current and future market trends.

The provincial and civil aviation administrations have jointly created a team to conduct an impact study on the surrounding area. This concern was raised by Premier Hun Sen, who asked that local authorities inform residents to refrain from constructing high-rise buildings near the abandoned airport as that could affect future development plans for the hub.

According to Chanserey- vutha, a feasibility study for another new airport, planned for the Mondulkiri Province in the east of the Kingdom, has neared completion. He said the finalized draft of that feasibility study will be complete by the end of January, 2021.

“Once the draft is finished, the technical working group will submit their plan to the government, seeking its consultation, and a decision on who will be in charge of building it,” said Chansereyvutha.

Despite this tough period for the aviation sector, new investments in the sector are underway or under study and work on the expansion of the existing international airports is ongoing, according to the SSCA.

The $3.5 billion China-built Dara Sakor International Airport in Koh Kong province is scheduled to be operational in mid-2021. Other new airport projects include Koh Kong Airport, Poipet Airport, Battambang Airport, and
the New Mondulkiri Airport, which remain in the study process while social, economic and environmental impacts are being reviewed.

The State Secretariat of Civil Aviation reported that from 2015 to 2023, total investment for these new airports, infrastructure and airspace will be approximately $3.5 billion.