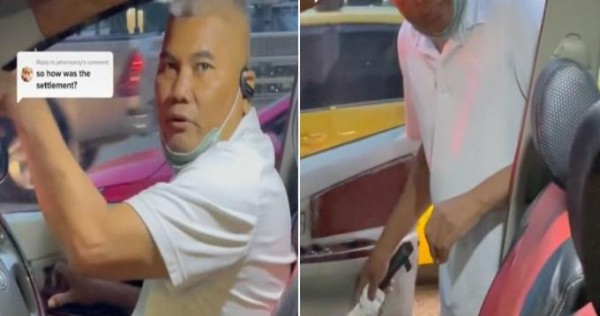 The Bangkok taxi driver who brandished a knife to intimidate a Singaporean couple amid a fare dispute has been fined and suspended by the authorities in Thailand.

According to the The Thaiger, the driver, Thawin Chong-ngam, was found to have committed several offences, including not using the taxi meter and behaving disrespectfully towards passengers.

He is also required to attend a three-hour training course on taxi rules and regulations.

The incident happened on Monday (July 11) when Ms Naomi Tan and her husband were travelling to Suvarnabhumi Airport from Sukhumvit to catch their 8.20am flight home.

At the start of the journey, the couple and the driver had agreed on a fixed fare of 400 baht, after the driver refused to use the taximeter to determine the price.

At the airport, Ms Tan gave the driver a 1,000 baht note but Thawin allegedly refused to return their change.

Ms Tan said the driver “turned aggressive” once he had the note in hand, and when they kept pressing him for the change, he pulled out a knife that had been stashed in the side door compartment.

It was only after the couple approached an airport security guard for help did Thawin finally relent and return their change.

The couple then filed a police report at a police station located within the airport.

BKK taxi driver tried to cheat us or cab fare and even showed me a knife to intimidate us at the airport. On the way he stopped in the middle of a highway and faked a taxi accident #bangkok