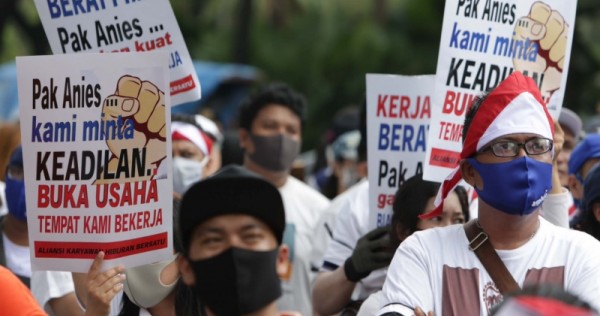 Hundreds of workers and businesspeople grouped under the Jakarta Association of Entertainment Entrepreneurs (Asphija) staged a rally in front of City Hall in Central Jakarta on Tuesday to demand entertainment venues, such as nightclubs, karaoke lounges, bars and massage parlors, be allowed to reopen.

Asphija head Hana Suryani said the association would stage a bigger rally if the Jakarta administration failed to grant its request.

“The Jakarta administration has to make the decision this week, if not, we’ll stage a second much bigger rally,” Hana said on Tuesday as quoted from kompas.com .

Hana said the city administration had implemented discriminatory practices by allowing restaurants and cafes to reopen during the transitional period of the large-scale social restrictions (PSBB) but by continuing to prohibit the opening of entertainment venues.

She also said that the management and patrons of entertainment venues would be able to adhere to Covid-19 health protocols.

Jakarta Governor Anies Baswedan announced on Thursday that the capital would extend the PSBB transitional period for the next two weeks as the latest data had shown an increasing trend in the rate of new Covid-19 cases.

As a consequence of the extension, the city administration will delay further relaxations of restrictions, such as allowing movie theaters and other indoor entertainment venues to reopen, that were initially scheduled for the end of July.

Hana said the city administration had not given consideration to entertainment businesses during the Covid-19 pandemic, even though the sector had previously employed tens of thousands who were now struggling to cope with the economic impacts of the pandemic.

“Some have been forced to leave their homes as they could not pay rent, others are struggling to pay their children’s tuition and vehicle loans and there are even workers who are struggling to put food on the table,” Hana said, adding that a number of entertainment venues had gone bankrupt and closed for good.

She said the city administration had not provided the sector with any clear solutions.

“The administration has never offered us a clear solution, even though we are very ready and will proactively implement the health protocols. Officials have not held discussions with us to find the best solution for all,” Hana added.

Anies decided to delay the reopening of entertainment venues after Jakarta recorded a 5.9 per cent Covid-19 positivity rate, an almost 1 percent increase from the previous week.

“In the last five weeks of the transitional PSBB period, Jakarta recorded a positivity rate of 4.4 per cent in the first week, followed by 3.1 per cent in the second week, 3.7 per cent in the third week and 4.8 per cent the following week. However, in the fifth week, the number increased to 5.9 per cent,” Anies said on Thursday.