American Chamber of Commerce in Cambodia elects new board members 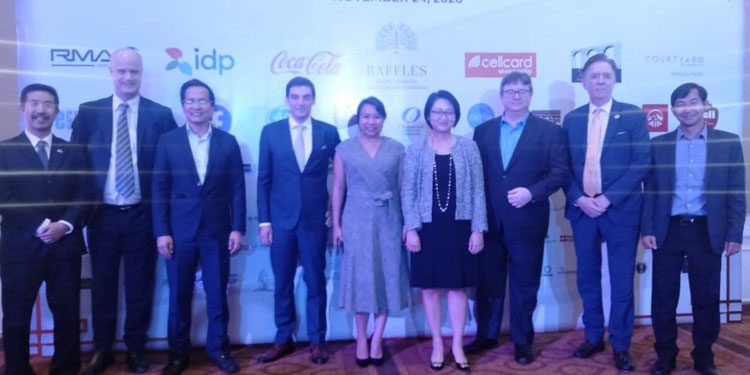 The American Chamber of Commerce in Cambodia (AmCham) announced six (out of nine) new board members during the chamber’s annual general meeting (AGM) held last night at Raffles Hotel in Phnom Penh.

The newly formed board will now select its new president during a closed-door board meeting next week.

The six new board members were elected out of 16 candidates with members casting their votes via hard copies of ballots since Nov 13.

A total of 73 out of 93 eligible company members voted.

Outgoing AmCham President Allen Dodgsan Tan said that he believes the chamber is being left in a much stronger position than when he took over four years ago.

He also gave a special thanks to the US embassy and the local government for helping AmCham become bigger and stronger.

US Ambassador Patrick Murphy also made a statement that AmCham assists US business in Cambodia that are the gold standard in Cambodia and the region.

However, he added he would like to see the current bilateral trade deficit reduced through increased imports of US goods and services.

The AmCham Corporate Social Responsibility award was given to Coca-Cola and the runner up was RMA Cambodia.

During the event the chamber also released its “2020 AmCham Survey”, which was created to determine the impact of COVID-19 on its members and how the chamber can provide further value to its members next year.

According to the report (which surveyed 40 percent or 57 AmCham members) when asked to what extend did COVID-19 affect their organisation, 60 percent of the responders were affected in some way with a 30 percent no-impact and only 10 percent reporting being not affected.

The most common challenge outlined by members was COVID-19 travel restrictions that has resulted in a drop in numbers of tourists and investors as well as local purchasing power, which cannot make up for those who were coming from overseas.