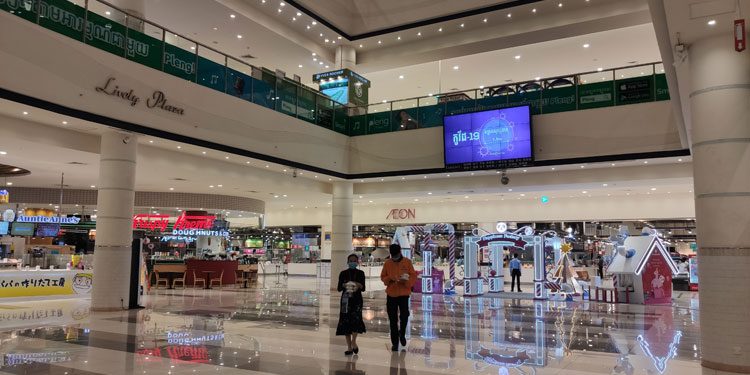 Prime Minister Hun Sen gave permission for Aeon 1 mall to reopen yesterday after a decision was made earlier in this week to shut it down as a result of the Nov 28 incident.

However, given the heightened fear among consumers, triggered by the confirmation of community transmission, it remains to be seen whether business at the mall will recover as quickly as the mall’s doors were reopened.

The decision to temporarily close was taken after a Cambodian woman tested positive for COVID-19, after entering the mall. The woman had eaten and carried out shopping in the mall.

The decision to open the mall was made after the Ministry of Health tested a total of 3,201 people working or shopping in the mall at the time of the incident, with all sample tests proving negative for the virus.  The mall was opened in stages throughout the day, with the largest part remaining cordoned off with shutters and by security guards.

The section of the mall including the food court and Aeon’s grocery section opened first, with the rest of the mall being opened at 3pm, although, with very few people ventured into it.

A shop assistant, who wished to remain anonymous in case it affected her job, said she understood the mall was opening in sections because some shops needed more time to clean and prepare and they were being extra cautious.  Khmer Times was unable to confirm her statement independently.

When the mall did finally fully open, it remained largely empty with far more staff than customers evident.

Although all the tests were negative, the news of the mall’s closing has made an impact on the number of people visiting to the detriment of all of the mall’s tenants.

One of the few shoppers at the mall, who introduced herself as Mav, explained that she wasn’t too worried about the recent closure.

“I trust that the government and Aeon would not open the mall unless it was entirely safe. Things have to carry on to keep the economy running. However, I believe that people should be wary and make sure to follow health guidelines,” she said.

Aeon mall also stepped up its safety measures. At every entrance to each shop or restaurant, there were clear safety signs, bottles of sanitiser as well as temperature-checking equipment.

Penn Sovicheat, undersecretary of state and spokesperson at Ministry of Commerce, explained that under strict health and safety measures, the economy must carry on.

“The ministry always supports the vibrant activities of a business. Whether that is [a] small or big business activity. People moving around in the normal way of life is a good sign of growth and shows that the economy can keep moving.”

“However, [because of the] circumstance[s] of the “November 28 incident” we have to take a lot of precautions, even if that means businesses temporarily closing down. In the case of Aeon mall, a temporary [closure] to stop the spread of COVID-19 was the best solution. It was better to take precautions, rather than risk the spread of the virus.”

“Luckily the closing was only [necessitated] for a short time, [to allow for disinfection}. Therefore, it [did] not affect the movement of the economy too much. We now have to adapt ourselves to the new way of living. After re-opening, shoppers will have to adhere to wearing a mask, keeping [their] hands clean and social distancing as [per] the instructions of the Ministry of Health. The country’s business will go on as usual, [making allowances] for the ‘new normal’.” Penn explained.