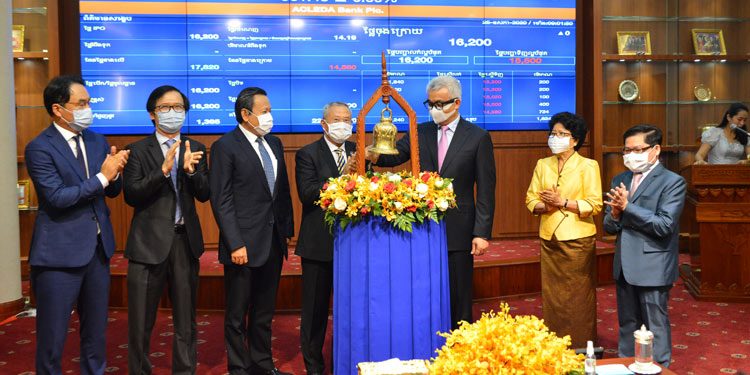 The number of shares traded in the secondary market was 17,472.

The Initial Public Offering (IPO) marks a new chapter in ACLEDA Bank’s success story, being the first commercial bank that was listed on Cambodia’s local bourse. Despite being in the middle of a global pandemic, 2,497 investors have successfully subscribed to the bank’s shares by participating in the flotation.

President and Group Managing Director ACLEDA Bank In Channy said at the listing ceremony yesterday that the bank had not set any target to raise capital from the stock market because it was based on the participation of the public, especially Cambodian people.

He said that the bank has strong liquidity and capital, so the IPO paved the way for public investors to join with the bank in the capital market. “The CSX is the market where we can diversify the sources of funding and it will never dry up so we can raise cash within the Kingdom,” Channy said.

Raising capital in the CSX is not so important for ACLEDA Bank, but they wanted to open the gateway for public investors and wanted to be a role model for other banking and financial institutions to consider the capital market, said Chief Executive Officer (CEO) at the CSX Hong Sok Hour.

Sok Hour added: “The capital market has been transforming saving habits for investment opportunities, allowing those who have surplus capital to give to those investors who need capital to expand and strengthen their businesses,” said Sok Hour.

He said that the ACLEDA Banks’ total capitalisation is $1.75 billion, which represents nearly three-quarters of the CSX’s capitalisation and it will make the CSX attractive for foreign and institutional investors, as well as encouraging trade activities in the bourse.

“The CSX is the capital gateway for companies and enterprises which are in need of capital to support the private sector,” he added.

As of yesterday, the CSX now has 12 listed companies, six bond companies and six share companies. These listed companies have collected capital from the CSX of around $240 million. Trading activities have grown remarkably. The price index has increased by 57 percent in 2019 compared with the year before. The average trading volume has increased from $26,000 per day in 2018 to an average of $157 million in 2019.