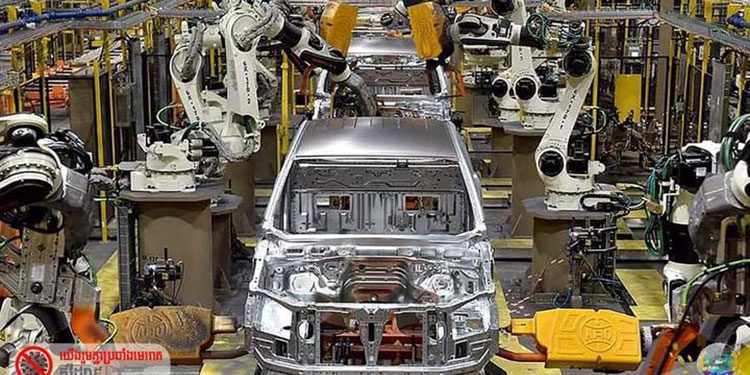 Of the total vehicle assembly plants, four are located in a special economic zone in Banteay Meanchey province, two others in Phnom Penh, two in Svay Rieng province, a factory in Koh Kong and another is in Preah Sihanouk province

Cambodia is expected to accommodate a dozen vehicle assembly factories producing for supplying to the local market and for exports, as three more projects have been expected to be online soon.

Figures from the Ministry of Industry, Science, Technology and Innovation stated currently there are ten vehicle assembly factories that are already in production chains producing vehicle and vehicle trucks supplying to the domestic market and for export.

The total investment of the registered vehicle assembly plants amounted to $78.4 million.

Of the total vehicle assembly plants, four are located in a special economic zone in Banteay Meanchey province, two others in Phnom Penh, two in Svay Rieng province, a factory in Koh Kong, and another is in Preah Sihanouk province, according to the report.

Three factories of which are from Japan while the other two are from Thailand, three from China, a factory from South Korea and one from a local company, read the report, adding that some 644 jobs were created for local people.

The domestically assembled vehicles are for supplying to domestic markets and some other for exports, said the ministry’s Secretary of State Heng Sokkong.

“Vehicles from domestic factories are mostly supplied to the domestic market and some for export,” Sokkong told Khmer Times on Thursday.

At least three vehicle assembly plant investment projects have been announced lately, but they have yet to be registered at the ministry.

One of them is the $21 million worth Ford assembly plant project, backed by RMA AUTOMOTIVE (CAMBODIA) CO., LTD, currently under construction in Pursat province’s Kroko district.

The last one is invested by K (Cambodia) Co Ltd, a dealer to distribute ISUZU brand vehicles in Cambodia, establishing an ISUZU vehicle assembly plant in Kampong Speu province.

According to Sokkong, the ministry report has yet to include any of the new factories, stating that they are in the stage of the process with local authorities.

“The vehicle assembly factory in Kampong Speu province, the ministry we have yet to receive any information from. The company may just proceed in the level of provincial talk,” he said.

They have yet to register or apply for a license to set up a factory at the ministry, he said.

“The country has potential in trade and doing business and investment under the trade preference deals bilaterally and regionally and new investment laws, offer large incentives to investors,” he said.