$400m investment inked for another hydro project in Cambodia 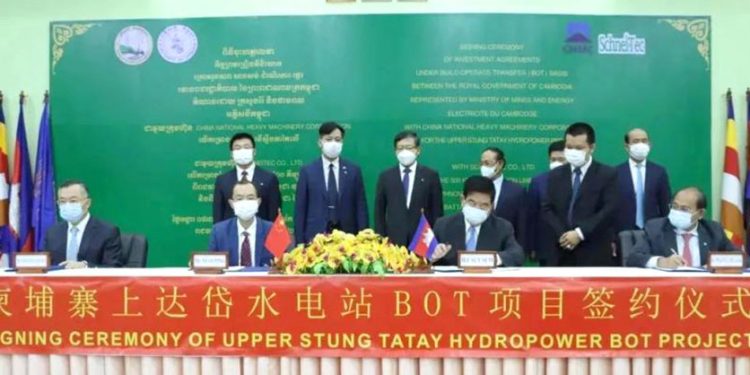 A build-operate-transfer (BOT) project is a concession contract in which a principal grants a concession to a concessionaire who is responsible for the construction and operation of a facility over the period of the concession before finally transferring the facility, at no cost, to the principal, as a fully operational facility.

According to the agreement, China Heavy Machinery will invest nearly $400 million to build Cambodia’s Shangddai hydropower project with an average annual power generation capacity of 530 million kilowatt-hours about 20 kilometres upstream of the Dadai Hydropower Station.

After completion, China National Heavy Machinery will invest and operate Cambodia’s Shangddai Hydropower Station in a build-operate-transfer manner within 35 years of the concession period and collect electricity fees according to the contractual electricity price to obtain electricity sales income.

The planned installed capacity of the project is 150 megawatts, which belongs to the annual regulating reservoir. It is the upstream cascade power station of the Dadai Hydropower Station invested and operated by China Heavy Machinery.

According to the company, as an important project in the construction of the Belt and Road Initiative, the Shangdadai hydropower project will bring huge economic and social benefits to Cambodia.

The completion of the project will assist with Cambodia being able to meet the urgent need for power supply for its rapid economic growth and provide a stronger energy guarantee for Cambodia’s economic construction and development, it stated.

China is Cambodia’s largest investor in developing hydroelectric dams and other infrastructure projects.