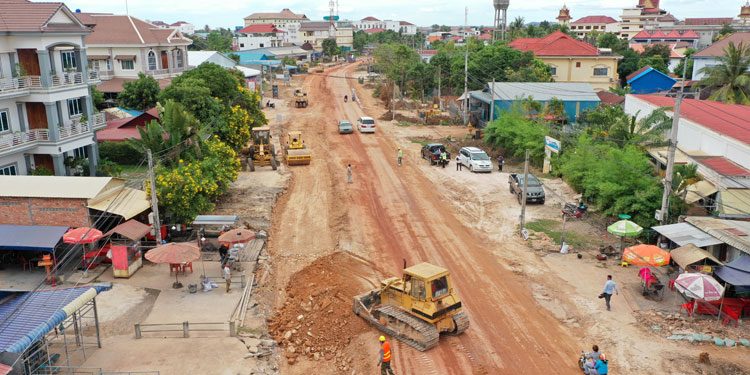 Prime Minister Hun Sen said yesterday that the construction of 38 roads in Siem Reap will modernise the city and improve the tourism experience in this renowned travel destination.

During the official inauguration ceremony in Siem Reap province on Monday, Mr Hun Sen said the government has considered Siem Reap to be one of the three poles, along with Phnom Penh and Sihanoukville, for national development and as a destination for tourism, culture, history and nature in accordance with its growing urbanisation, along with the idea of protecting and improving the environment of the people and the creation of smart cities.

The prime minister said the budget for the construction of the roads is set at $150 million. The government is also renovating about nine kilometres of Steung Siem Reap (Siem Reap River) in the city to make it more attractive.

The project is part of the Siem Reap Tourism Development Master Plan 2020-2035, which aims to transform this main tourism hub into a smart city while preserving Khmer culture and architecture.

“Once it is completed, the project will act as an interconnected infrastructure connecting the town to the suburbs and to major tourism sites and the national road network, aiming at reducing traffic congestion in the city, promoting transportation growth and attracting investors, businesspeople and international tourists, which will contribute to national economic growth after the COVID-19 crisis is over,” Mr Hun Sen said.

The premier said this is an important contribution to improving the infrastructure system in Cambodia.

He added that this is another new achievement for the people in Siem Reap, which next year will see clean roads, a good drainage system and closed-circuit television. “The achievement in Sihanouk province and Siem Reap will not only solve the current issues but also encourage economic growth in the near future.”

“The questions is how big the number of international tourists will be and by what means they will come. There is still no answer or prediction about this because the COVID-19 pandemic has yet to slow down across the globe, especially in Cambodia,” Sinan added.