World’s biggest trade deal signed – and doesn’t include US 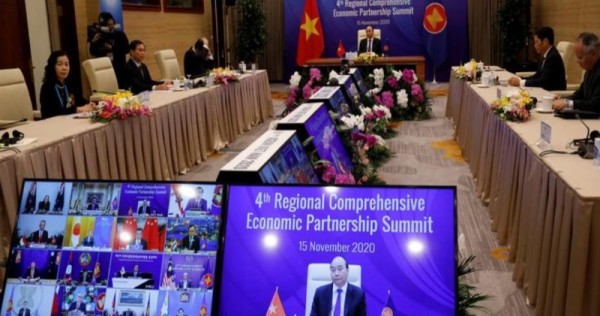 China scored a “victory” on Sunday (Nov 22) as 15 Asia-Pacific nations signed the world’s biggest free-trade pact, sealing an agreement that excludes the United States and extends Beijing’s economic sway in the region.

The realisation of the Regional Comprehensive Economic Partnership (RCEP) comes after eight years of negotiations.

The pact would take effect within the next two years after all countries ratified the agreement domestically, Indonesia Trade Minister Agus Suparmanto said last week.

Without providing details, China’s Ministry of Finance said on Sunday that the new pact included promises to eliminate tariffs within the group, including some immediately and others gradually over a decade.

The ministry also said China and Japan achieved a “historic breakthrough” by reaching a bilateral tariff reduction arrangement on top of their multilateral trade pact – again without elaborating.

The deal marks the first time the rival East Asian powers of China, Japan and South Korea have agreed to enter into a joint free-trade pact.

Participants in the agreement include a mix of developed, developing and poor economies, with special clauses for transitional arrangements, including technology transfers for the least developed nations such as Laos, Myanmar and Cambodia.

The RCEP members also reaffirmed that they continued to “highly value India’s role in the RCEP” and remained open to India’s accession down the road. New Delhi withdrew from negotiations late last year amid concerns over the country’s trade deficit with China.

Unlike the CPTPP, the RCEP does not cover labour and environmental standards. Regional trade analysts and officials have said that despite having limited provisions on services and investment, and lower standards than the CPTPP, the China-backed trade grouping would give much needed impetus to the pandemic-hit world economy. That would further pull the economic centre of gravity towards Asia, with China poised to take the lead in writing trade rules for the region.

“The RCEP may prove to be the tonic Asia needs to recover from the pandemic-induced slump,” said Stuart Tait, Asia-Pacific regional head of commercial banking at HSBC.

“Intra-Asian trade, which is already larger than Asia’s trade with North America and Europe combined, will continue to power global economic growth and pull the economic centre of gravity towards Asia.”

“Our priority has to be put on trade ties with Asia,” He Weiwen, a former Chinese trade official and now senior researcher at the Centre for China and Globalisation, said at a forum in Beijing on Thursday.

Wendy Cutler, who was acting deputy US trade representative under US president Barack Obama and helped negotiate the TPP, called the signing of the RCEP “another wake-up call for the United States on trade”.

“It has been a promoter of the RCEP since day one. Then, as the US retreated from the regional stage and pursued a trade policy based on unilateralism, Chinese leaders used that vacuum to portray Beijing as the reliable partner of choice for economic growth, trade, and investment.”

US president-elect Joe Biden has been non-committal on whether the US will try to join the CPTPP, the successor of the original TPP agreement that he and Obama promoted while in office previously.

In the wake of the coronavirus pandemic, the Trump administration has floated the idea of restructuring global supply chains with countries like India, Australia, Japan, New Zealand, South Korea and Vietnam, but stopped short of rallying them under a formal trade framework that could be an effective counterweight to China’s growing influence.

Tu Xinquan, president of the China Institute for WTO Studies at the University of International Business and Economics, said the US’ unilateral trade policy under Trump, combined with the pandemic, had brought Asia-Pacific economies closer.

“The conclusion of the RCEP has reflected the need for Asia-Pacific economies to unite after the US’ trade wars and unilateral trade policies. Ensuring stability in regional supply chains has also become much more important as the pandemic has brought destruction to the global supply chains,” Tu said.

“Of course the CPTPP has higher standards than the RCEP. But it remains uncertain how much marginal benefit can be created by setting those standards and it may take years for the impact to show, while the growth brought by the trade liberalisation policies in the RCEP will emerge much faster.”

SMEs in Cambodia embracing digital to pandemic-proof their businesses