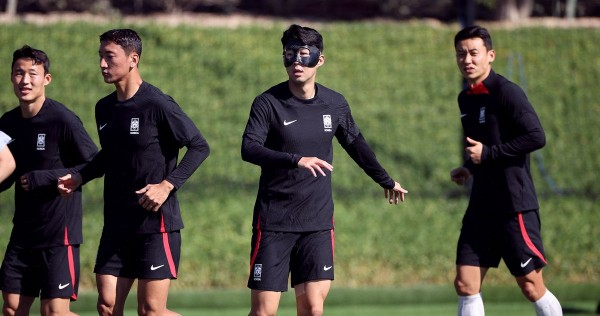 DOHA – South Korea’s Son Heung-min will be able to play with a mask in their World Cup Group H opener against Uruguay on Thursday (Nov 24), coach Paulo Bento said as the talismanic forward returns from a surgical procedure to stabilise a fracture around his left eye.

Son was injured midway through Tottenham Hotspur’s Champions League tie at Olympique de Marseille earlier this month and there were doubts the 30-year-old would be fit in time for the World Cup group stage.

“Sonny will be able to play,” Bento assured reporters on Wednesday.

“I think the fact that he will be wearing a mask is not an inconvenience for him, it’s quite natural for him. We stuck with the plan when we arrived here… But we will see tomorrow how it will be.

“Our hope is that he will be comfortable to the greatest extent possible and use the best strategy so that he can feel at ease during the game. He knows and we know that after his injury we cannot take any risks.”

Bento confirmed that Wolverhampton Wanderers forward Hwang Hee-chan had not recovered in time for the game while the team will take a late call on defender Kim Jin-su.

South Korea have failed to replicate their magical run to the 2002 World Cup semi-finals in recent tournaments and Bento said he would not burden them with the aim of qualifying for the knockout stages, taking things “one match at a time” instead.

“Our aspirations is something we conveyed, we wish to compete in the best manner possible in the three group games,” he said.

“We are well aware that we will face many difficulties with rivals we play against and we’re aware that in the history of World Cups, South Korea only advanced to knockouts twice – one of them when they were co-hosts with Japan.

“I don’t see any reason to put any pressure on their shoulders. If this was a team that always advanced, then I would say, ‘Yes, we need to qualify (for the next stage)’.”

Midfielder Jung Woo-young, one of the most experienced players in South Korea’s World Cup squad, said set pieces would be one of their “biggest weapons” and brushed aside concerns that Uruguay’s taller players would have an advantage.

“Set pieces are very important to determine the outcome of the match, so this will be a big advantage for us,” said the 32-year-old, who plays for Al-Sadd in the Qatar Stars League.

“We have an excellent kicker in our team and we have players that are physically equipped.

“We also have tall players, so we’re not worried about the height. It is not a determining factor in football, so this doesn’t bother us.”