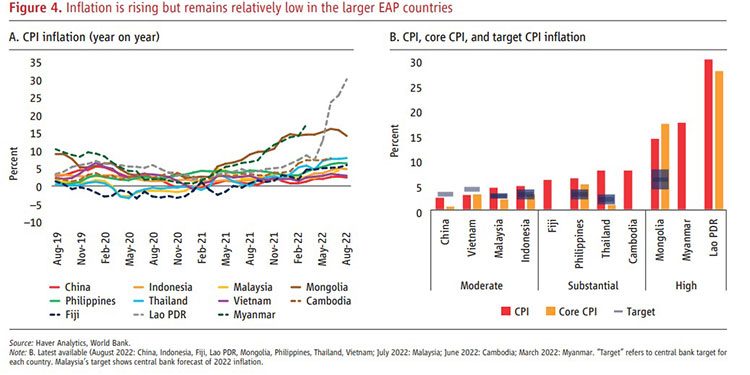 The World Bank upgraded Cambodia’s growth forecast to 4.8 percent this year, up from its April estimates of 4.5 percent.

The Kingdom is projected to grow 5.2 percent next year, the bank said in its ‘East Asia and the Pacific economic update October 2022.’

However, the bank pointed out that Cambodia is vulnerable to slowing global demand.

“Export-dependent economies like Cambodia, Malaysia, and Vietnam are particularly vulnerable to slowing global demand. In contrast, a relaxation of border closures and the related recovery in tourism activity is expected to boost growth in the Philippines, Malaysia, Thailand, and several tourism-dependent Pacific island countries, especially Fiji. Countries with large external financing needs, either in the form of short-term capital (Cambodia, Indonesia, and Malaysia), or because of high overall debt (Lao PDR and Mongolia), are more vulnerable to the tightening of global financing conditions than their peers,” the report indicated.

It said the Output in Cambodia this year is expected to surpass pre-pandemic levels of output in 2022.

According to the report, the recovery was uneven across sectors. While sectors like information and communication technology, finance and agriculture have been resilient, output in the transportation, accommodation and catering sectors remains well below pre-pandemic levels in Malaysia, the Philippines, and Thailand, it said.

The report said the growth in most of developing East Asia and the Pacific rebounded in 2022 from the effects of COVID-19, while China has lost momentum because of continued measures to contain the virus.

Looking ahead, economic performance across the region could be compromised by slowing global demand, rising debt, and a reliance on short-term economic fixes to cushion against food and fuel price increases.

Growth in developing East Asia and the Pacific outside of China is forecast to accelerate to 5.3 percent in 2022 from 2.6 percent in 2021, the economic update said.

Talking about the report, World Bank East Asia and Pacific Vice President Manuela V. Ferro said, “Economic recovery is underway in most countries of East Asia and the Pacific. As they prepare for slowing global growth, countries should address domestic policy distortions that are an impediment to longer-term development.”

Strong goods exports supported growth in the region’s economies reflecting robust external demand. Services exports, which were sluggish, contributed to a lesser extent to growth in the first half of 2022. Private consumption has also been buoyant in the region excluding China as many countries lifted Covid-related restrictions, it said.

The report said inflation has accelerated in Cambodia. It pointed out that price pressures are building rapidly in other countries, reflecting rising energy and food prices.

During the crisis, as governments increased spending, public debt increased in most developing EAP countries by more than 10 percent of GDP compared to pre-pandemic levels. At the same time, private sector debt remains high, it said. An increase in non-financial corporate debt was the major contributor to the rise in private debt during the COVID-19 crisis in Thailand, Vietnam and Cambodia, the study pointed out.

Pointing out that the foreign currency debt as a share of total debt is high in Cambodia at 100 percent, the bank said that among countries highly indebted in foreign currency, currency depreciation contributes to an increase of 1.6 percentage points in the debt-to-GDP ratio.

These countries also have a significant share of variable rate external debt and external debt borrowed in non-concessional terms. China is the largest creditor for Cambodia and Lao PDR,” the report noted.

Growth in much of East Asia and the Pacific has been driven by the recovery in domestic demand, enabled by a relaxation of Covid-related restrictions, and growth in exports, the report said.