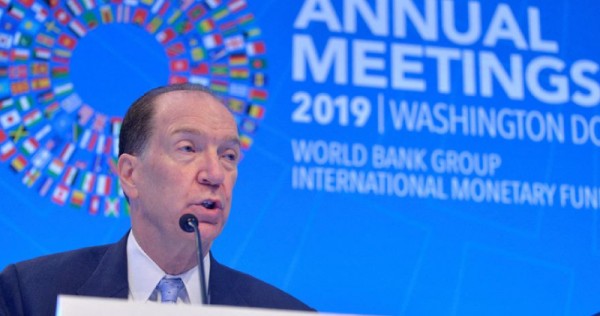 WASHINGTON – World Bank President David Malpass came under heavy criticism on Wednesday (Sept 21)  after he declined to say whether he accepts the scientific consensus on global warming, rekindling concerns about the bank’s lack of a deadline to stop funding fossil fuels.

Malpass appeared at an event hosted by the New York Times at Climate Week in New York City on Tuesday and was asked whether he believes that the “manmade burning of fossil fuels is rapidly and dangerously warming the planet.” Malpass tried at first to dodge the question but later said: “I don’t even know. I’m not a scientist.”

The remarks, which circulated on social media, drew criticism from former climate diplomats and civil society groups who called on President Joe Biden to replace Malpass as the president of the multilateral development bank.

The future of a second Trump development bank appointee, Inter-American Development Bank head Mauricio Claver-Carone, is also in doubt after an investigation into allegations of a relationship with a staffer.

“How is this possible in 2022? This apathy produces weak climate action when countries so badly need @WorldBank aid & finance,” Laurence Tubiana, a former French climate envoy and key architect of the 2015 Paris climate accord, said on Twitter.

A coalition of civil society groups on Wednesday called for the World Bank to fire Malpass.

The World Bank and White House declined to comment.

The US Treasury said it expected all partners to be committed to fighting climate change.

“We expect the World Bank Group to be a global leader of climate ambition and the mobilisation of significantly more climate finance for developing countries,” a spokesperson said. “We have – and will continue – to make that expectation clear to World Bank leadership. The World Bank must be a full partner in delivering on this global agenda.”

Last year, over 70 non-governmental organisations had jointly called for Malpass to be replaced on the grounds that the Bank was falling short on climate action.

The World Bank reduced its new coal power investments in 2013 and stopped funding upstream oil and gas operations in 2019, but has so far resisted pressure from European board members and climate campaigners to phase out fossil fuel financing entirely.

In January 2021 the Bank’s board approved a $620 million investment in a multibillion-dollar liquified natural gas project in Mozambique.

“It is time for the White House and governments all over the world to think hard as to who they want at the helm of the World Bank,” said Sonia Dunlop from think tank E3G. “You don’t need to be a scientist to understand climate science.”

Other experts said a strong grasp on climate science should be a pre-requisite for the job of World Bank president during a time in which climate-driven catastrophes are becoming more frequent and impacting many developing countries that receive financial support from the Bank.

“Climate change will impact the poorest in the world the most so to have the head of the World Bank not being clear and forceful on taking on climate change sends the wrong message,” said Gilbert Metcalf, former deputy assistant Treasury secretary for environment and energy under the Obama administration.

Selwin Hart, special adviser to the UN secretary-general on climate action, had also criticised the World Bank at the COP26 climate summit in Glasgow last year.