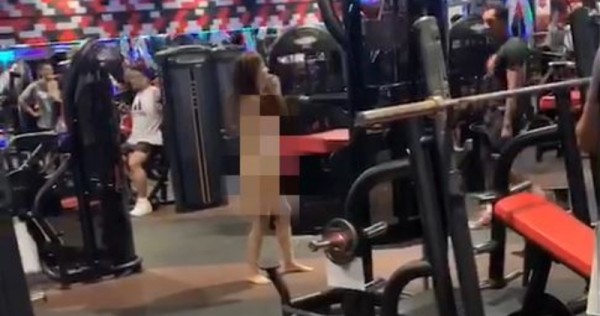 Hell hath no fury like a woman scorned — or turned away by a gym.

Unhappy that she was not allowed to enter with her pet cat, the 56-year-old stormed into a gym in Tamsui, New Taipei City on Sept 4 night.

She flew into a rage, yelling “I want to sue World Gym until it closes down” and kicking a female gym staff as she made her way into the exercise area.

Gym staff attempted to restrain her as they called the police for help, but the woman managed to break free of their hold and started to take off her clothes.

She walked around the facility stark naked, stopping at one point in time to swing some battle ropes.

But the woman didn’t stop there, she went on to harass other gym-goers who were exercising at various fitness stations.

A fitness instructor who tried to stop her was met with verbal abuse in English.

After making a scene for about 30 minutes, she was finally subdued and made to put her clothes back on after police officers arrived at the gym.

By then, her antics were already recorded on several mobile phones and video clips of the incident soon made their way online.

According to reports, the woman had her membership terminated in August after she repeatedly violated the gym’s regulations.

It was also not the first time she attempted to bring her pet into the gym, staff said.

After exiting the gym, the woman refused to get into the police car and had a confrontation with officers until an ambulance arrived to take her to a hospital.

Authorities said they were looking into a case of indecent exposure and causing hurt.