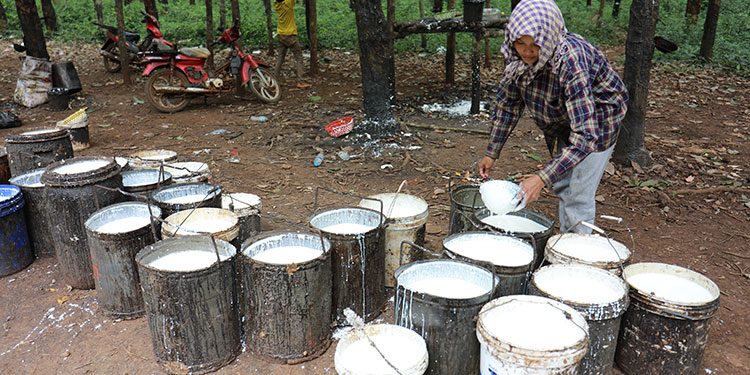 Global economic crisis, rising inflation, interest rate hikes in the United States, the Russia-Ukraine war, the geopolitical situation involving US and China, and a partial shutdown in China adversely affected rubber exports in Cambodia in the first seven months of this year, a top official said.

Cambodia’s revenue from dry rubber exports in the first seven months of this year dropped six percent to $254.8 million compared to the same period in the previous year.

According to a General Directorate of Rubber (GDR) report, the country exported 161,562 tonnes of dry rubber in the January-July period, a decrease of 0.3 percent when compared with the same period in 2021.

Him Aun, GDR director-general, told Khmer Times that the main export countries during the period were Vietnam, Singapore, Malaysia, China, Japan and Korea.

“The adverse scenario globally has pushed up raw material and energy prices,” he pointed out.

When asked about the likely performance of Cambodia in rubber exports in the remaining months of this year, he said, “In my view, the daily income will increase due to increased harvest area, production and consumption. According to a report from the Association of Natural Rubber Producing Countries (ANRPC), global production reached 1.113 million tonnes by June 2022, an increase of 3.8 percent over the same period in 2021. Similarly, global consumption projected a faster growth at 5.8 percent amounting to 1.206 million tonnes during the same reference period.”

On the current challenges being faced by the rubber industry in the country, he said, “The rubber market is unstable because we rely on exports. Besides many youngsters prefer to stop farming and concentrate on other industries and services for jobs.”

The country has so far planted rubber trees on a total area of 404,044 hectares, of which 310,193 hectares, or 77 percent, are old enough to be tapped, according to the GDR report.

The Kingdom exported 366,300 tonnes of rubber latex in 2021, an increase of eight percent compared to the export figures in 2020. The country also earned more than $610 million from exports last year.

In its June natural rubber (NR) Statistical Report, The Association of Natural Rubber Producing Countries (ANRPC), said the outlook of the NR market is expected to improve further during this year in production and consumption. Based on the estimates given by member governments up to June 2022, the association provided the outlook for the rest of the year.

It pointed out that despite the favourable market fundamental in the NR market, the market sentiments were driven by various factors namely the resurgence of Covid-19 cases in China, recovery outlook from the rising raw material and energy costs, worries over inflationary pressure and interest hikes from tightening monetary policy imposed by central banks, uncertainties from geopolitical conflicts between Russia and Ukraine.