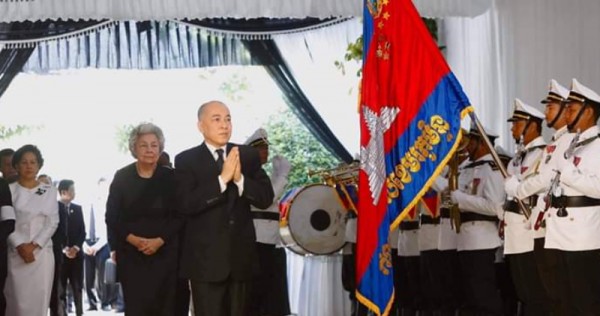 In the tree-lined Dong Jiao Min Alley in Beijing’s former Legation Quarter, across the street from the St Michael’s Church, stands a gated compound watched over by a pair of Chinese imperial guardian lions.

The building, which housed French diplomats until the end of the Qing dynasty and monarchy in 1911, is exclusively reserved for two royal guests of the Chinese Communist Party: Cambodian King Norodom Sihamoni and queen mother Norodom Monineath Sihanouk.

The two Cambodian royals are regular visitors to Beijing, almost de facto residents. Their trips, which take place at least twice a year, feature a meeting or even banquet with the upper echelons of the party, including President Xi Jinping.

They receive free medical services from the best doctors China has to offer at Beijing Hospital, a state-run facility that caters for elder and senior Communist Party leaders. It was here that the late King Norodom Sihanouk was treated until his death in 2012.

Sihanouk, who spent over 70 years as an influential figure in Cambodian politics, was a brother-like friend of China’s founding premier Zhou Enlai. The two statesmen are often cited as the pioneers of the Southeast Asian kingdom’s modern-day relations with the People’s Republic of China.

They met in 1955 during the Bandung Conference in Indonesia as developing Asian and African countries moved to strengthen their ties in a bipolar world divided by the United States and the former Soviet Union.

Since the late king’s death, China has continued to support the Cambodian monarchy – a stance that was on display during the latest visit by the two royals, which took place from early October to early November.

King Sihamoni, 67, was invited on a VIP trip to Shaanxi province, visiting the former imperial city of Chang’an and the area where Xi lived during the Cultural Revolution, as well as where the president’s family was purged and sent for re-education.

Queen mother Monineath, 84, was awarded the Friendship of the People’s Republic of China by Xi in a hastily organised grand event at the Great Hall of the People in early November.

Julio A. Jeldres, a former biographer and personal secretary to the late King Sihanouk, said the current Chinese leadership, scions of the state’s founding fathers, saw the need to sustain the close links with the Cambodian royal family.

“The Chinese are very good at keeping this relationship a kind of personal relationship that is not strategic and is not political, while having a political relationship with the current government of the ruling party here,” said Jeldres, referring to the Cambodian People’s Party (CPP).

Cambodia, under Prime Minister Hun Sen is now one of Beijing’s closest allies, while China is the country’s major foreign donor, creditor and investor.

But the prime minister was on the rival side in the 1980s when China supported King Sihanouk’s Funcinpec faction and the Khmer Rouge to fight the Vietnamese-backed government run by Hun Sen and his comrades in Phnom Penh.

A peace agreement in 1991 led to the country’s first democratic elections and a return to constitutional monarchy in 1993, in which Sihanouk was recrowned king.

China’s continued support for the royalist Funcinpec party during the 1990s was challenged when Sihanouk’s son and then-party leader Prince Norodom Ranariddh enraged Beijing by engaging with Taiwan, and when Funcinpec lost power in an armed clash with the CPP in the so-called 1997 coup d’état.

That was the turning point for Beijing to start building a new relationship with Cambodia, by getting politically closer to Hun Sen’s CPP and keeping a “legacy” and “symbolic” relationship with the palace and the royal family, Jeldres said.

The most controversial aspect of the relationship with the Cambodian royal family is Beijing’s earlier support for the Khmer Rouge regime, under which at least 1.7 million people died, including an unknown number of royals.

From 1976 to early January 1979 – when Vietnam took over Phnom Penh – the late King Sihanouk, queen mother Monineath and the current monarch Sihamoni themselves were placed under de facto house arrest by the Khmer Rouge, though Zhou, China’s first premier, made a personal request to the regime to keep them alive.

This shows that relations between Beijing and the royal family of Cambodia had not always been smooth, said Youk Chhang, director of the Documentation Center of Cambodia in Phnom Penh.

“What remains is the conservative Chinese philosophy on a permanent friendship, the theory that we always help each other as a friend,” Youk told This Week in Asia.

“But not all generations of Chinese leaders from 1958 always endorsed that philosophy. The Gang of Four disliked the King-Father. China supported the Khmer Rouge, which was responsible for the execution of some royals.”

What China did “successfully”, Youk said, was to turn this troubled past around and forge close bonds with the Cambodian royals as well as the government, offering assistance, political support and financing flows.

Funcinpec has lost all its armed and political power in the face of the CPP’s increasing dominance in Cambodian politics.

Since the 2013 general election, the royalist party has won no seats in parliament. The CPP now occupies all seats in the 125-member National Assembly after the main opposition party, the Cambodia National Rescue Party (CNRP), was outlawed ahead of the 2018 election.

A source with close ties to the palace said members of the royal family had “no certainties” about their future in an increasingly one-party state, given previous disagreements between the royals and the CPP during the time of Sihanouk.

“The royals’ strong friendship with China protects their standing,” said the source, who requested anonymity.

“For the Cambodian royals, it is an important relationship, historically, strategically, and sentimentally”, with their close ties with Beijing offering them “leverage” in dealing with the CPP.

“The special relationship with China is the fruit of the King-Father’s hard work. Thanks to it, China has become a second home to the Cambodian royals where they can always go when there is trouble at home,” the source added.

Public tensions between the Cambodian government and royal family rose when the Nepalese monarchy was abolished in 2008.

Prime Minister Hun Sen cited the misconduct of Nepal’s royals as the reason for the demise. King Sihanouk, who abdicated in 2004 to make way for his son, later felt the Cambodian monarchy was threatened and issued a letter to say that senior royals including himself and current King Sihamoni would consider living in exile in Beijing.

“No, this is not about abdication

“After 1993, we are ruled by the constitutional monarchy regime that the CPP respects and is determined to protect as the monarchy is enshrined in the constitution,” Sok Eysan told This Week in Asia.

On Wednesday, Hun Sen praised the king for making donations to the government’s coronavirus pandemic response and flood relief efforts over the past month.

“In this world, the poorest monarch will be the king of Cambodia,” Hun Sen said. “Though the poorest, he has the most universal heart of a humanitarian, that his subjects, his people, his civil servants look up to as a model.”

Another source close to the palace said China’s support was “insurance” for the royal family in the CPP-dominated Cambodian political scene, adding that the palace still plays a role in relations with Beijing.

Those with palace connections had occupied the role of ambassador to China since 1993, the source added.

Current ambassador Khek Cai Mealy Sysoda, better known as Nanou, has been Cambodian envoy to China since 2007 and before that was a chief protocol officer to Sihanouk. Her husband, Khek Sisoda, was the ambassador from after the peace agreement until 2004, and was succeeded by her brother-in-law Khek Lorang.

While every single service at the Beijing residence on Dong Jiao Min Alley was covered by the Chinese Communist Party government, the queen mother and king were also served by a doctor, a nurse, and chef – all Chinese – rotationally sent to Phnom Penh, the source said.

While visiting Shaanxi province in early November, King Sihamoni was taken to Tang Paradise park and had a banquet with the provincial party chief Zhao Zhengyong and governor Liu Guozhong.

“Long live the grand eternal friendship between China and Cambodia,” the king exclaimed.

WHO encourages active life at home during pandemic