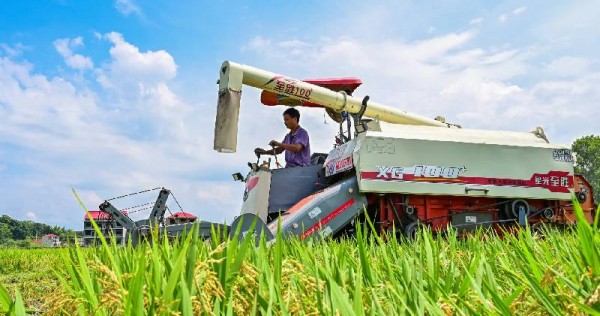 Rice prices are heading upwards, world food experts have warned, as soaring fertiliser costs look set to weigh on yields of a crop that’s a staple for at least two billion people across Asia.

Four years of plentiful harvests had largely kept rice affordable, but with natural gas – a key ingredient in most fertiliser production – trading at historic highs in the wake of the Russia-Ukraine conflict, both the UN food agency and World Bank now forecast rising prices.

“It’s now inevitable. Prices will go up,” said John Baffes, senior agriculture economist at the World Bank’s Development Economics Prospects Group. “Rice was the exception, but not any more.”

Natural gas is the primary feedstock used by all major fertiliser producers except China – which uses coal – to manufacture the ammonia that about 80 per cent of fertilisers are made from globally.

“The high cost of gas has created demand destruction – so we are seeing curtailments in production, in addition to some producers choosing to halt production altogether.”

“A lack of fertiliser means damaged crops. Or not a good yield,” she said – a particular problem for Asian nations that previously relied on Russian fertiliser imports and where “farmers are very poor … compared to other parts of the world”.

Analysts said China, which was the world’s top exporter of phosphate fertilisers before imposing restrictions last year that it has yet to lift, and India were insulated from some of the worst effects of the crisis by protectionist policies and rice stockpiling.

As recently as April, the ready availability of rice had led the UN Food and Agriculture Organization and the World Bank to conclude that the crop’s prices would fall in the second half of this year.

But by June both had changed their forecasts, as had world-leading food policy institutes, to reflect the impact of record gas prices on the cost of fertiliser as the Ukraine conflict wore on with no end in sight.

“When we made our forecast in April, we based it on the assumption that energy markets would stabilise after the initial shock of the war,” Baffes told This Week In Asia.

“Instead, they’re more unstable, particularly for gas and coal”.

About one-third of the cost of farming the world’s four major grains – rice, wheat, maize and barley – goes on fertiliser. Until recently, rice was the only one of the four that had proved immune to rising prices. Since 2020, the cost of all four had collectively “basically tripled”, Baffes said, with the world grain index largely being driven up by the latter three.

Indonesia ’s President Joko Widodo sounded the alarm about a looming “rice crisis that might affect two billion people” last month at the G7 summit in Germany, according to his foreign minister, Retno Marsudi.

“We must act fast to find a concrete solution. Food production must be ramped up. The global food and fertiliser supply chain needs to return to normal,” he was cited as saying, stressing the importance of ensuring sanctions imposed because of the war were not applied to Russian food and fertilisers.

The crisis has been worsened by the war, but has its roots in the global economic turmoil caused by the pandemic.

Strong demand, limited supply and higher input costs drove fertiliser prices up 80 per cent last year, according to the World Bank. In the year to May following Russia’s invasion of Ukraine, they had gone up another 30 per cent. Prices have since retreated slightly, but remain near record highs.

Last year, India imported about 15 per cent of the ammonia it used to make nitrogen-based fertilisers from Russia, which also accounted for about 10 per cent of Thailand, Vietnam and Malaysia ’s fertiliser imports and more than 15 per cent of Indonesia’s.

The Russian invasion of Ukraine is “hugely responsible” for the current fertiliser shortfall, Meehan said.

Globally, rice production is expected to remain more than adequate until the end of this year, according to the UN food agency and World Bank, supported by top producers China and India, which accounted for 51 per cent of the world’s total output last year.

Yet prices will rise. In May, it was revealed that Thailand and Vietnam, respectively the second and third ranked exporters after China, were in talks on a pact to raise the price of their rice exports to support domestic industry, farmers and manage growing production costs.

The impact of rising fertiliser costs on rice prices will be uneven as government policies and changes in usage will vary, as will the effects of less usage on crop yields, said David Laborde, senior research fellow at the International Food Policy Research Institute in Washington.

“Even within farms, farmers may rebalance their fertiliser application across their fields to mitigate the impacts of the reduction,” he said.

“This all means that we are likely to see a lot of difference in the impacts on yields across countries, regions, and even individual farmers.”

Thai farmers are likely to adapt their practices and may suffer limited losses on average, Laborde said, while farmers in cash-strapped Sri Lanka are at the other extreme as the bankrupt nation struggles to pay for imports.

China has yet to announce whether it will lift export curbs it placed on fertilisers last year and has been stockpiling grains to ensure domestic food production, while India has a long-standing protectionist policy of subsiding fertilisers and imposing export bans to shore up domestic supplies.

Laborde said it was likely that both countries would be able to maintain rice yields this year, keeping average global production high, “but those averages do not tell the story of some countries and individual farmers who may still suffer serious losses”.

“For vulnerable farmers in Africa or Asia, the yield difference between having fertiliser or no fertiliser is more extreme,” he said – as much as 50 per cent for those who were previously accustomed to getting optimal quantities of fertiliser but now had none.

Laborde said rice was particularly vulnerable to “large price swings” because most countries that produce it keep most for domestic consumption. Only nine per cent of global rice production makes its way to international markets, compared to more than 20 per cent for wheat and other grains.

“At the international level, the rice market is pretty thin and any change at the margin could lead to large price swings, making the situation much worse for people or countries that, this year, will have to buy on these markets,” he said.