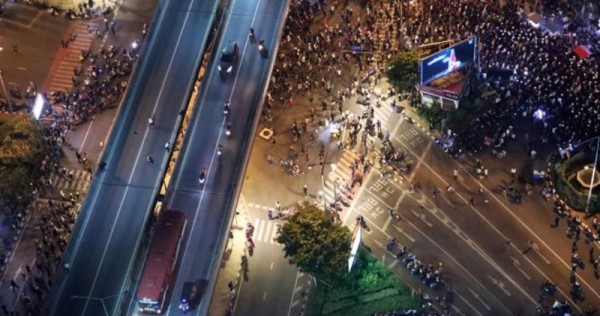 Thailand’s pro-democracy protesters massed outside the German embassy in Bangkok on Monday night as their movement sought a wider international spotlight, pulling the monarchy deeper into the heart of their demands for reform.

Thailand’s King Maha Vajiralongkorn spends much of his time in Germany, angering many Thais who receive snippets of his high living through the European country’s tabloid press.

In their petition, one of the main protest groups, Khana Ratsadon or “The People”, urged Germany to investigate the king’s actions while away from Thailand in order to “bring Thailand back to the path of the truthful constitutional monarchy”.

Thailand’s monarchy, super rich and the apogee of a power pyramid supported by the army and tycoons, is cloaked from criticism or accountability by a royal defamation law – one the protesters are openly flouting.

Germany has also become increasingly uneasy over the king’s stay in its country, with the German foreign minister on Monday again questioning the potential illegality of Vajiralongkorn ruling Thailand from European soil.

“We have not only been looking into that in recent weeks, but on a regular basis,” Heiko Maas said. “If there are things we consider to be illegal, that will have immediate consequences.”

The king must sign off on Thai laws and is seen as the ultimate political authority in Thailand and the pillar holding up Prime Minister Prayuth Chan-ocha’s unpopular government, despite being cast as above politics.

“The Germans must pressure the king … then he might kick out Prayuth,” said Praew, 42, who also gave just one name on concerns for her safety.

Protesters say the palace must be constrained within the constitution as laid down by the 1932 Thai revolution, which ended the system of absolute monarchy.

But their calls for reform of the monarchy have opened old divides within the country – with royalists, including the army-aligned establishment and an older generation of conservatives, outraged by the calls for changes to the way Thailand’s highest institution operates.

Faced with an unprecedented challenge to his authority, the king has made equally unseen public-relations moves of his own to rally his supporters. In a rare walkabout among yellow-shirted loyalists on Friday night outside the Grand Palace, the king was directed by Queen Suthida to a man who had held a royal portrait aloft in the middle of a recent pro-democracy rally.

In candid cellphone video, the king was heard saying to the prostrated man: “Very brave, good job, thank you.” It was a an apparent chance encounter pinged across social media in what many saw as a rallying cry for royalists.

But for the protesters, it meant another chance to to mock and subvert the language of Thai leaders, and on Monday night they chanted “Very good, very brave, thank you” as they arrived at the embassy.

So far there has been little firm international reaction to Thailand’s youth-led protests, with the US and European Union – the usual first responders to human rights issues – staying quiet, while China has stuck to its policy of refusing to enter into the domestic politics of other countries.

“We are monitoring this long term,” German Foreign Minister Heiko Maas said Monday of Vajiralongkorn’s presence in his country. “It will have immediate consequences if there are things that we assess to be illegal.”

Protesters say they are drawing their strength in part from the Milk Tea Alliance – a social media movement linking Hong Kong, Taiwan and Thai pro-democracy protesters against their government opponents.

Small but colourful protests in Japan and Korea in support of the Thai protesters have also signalled a widening of interest in the outcome of the pro-democracy demonstrations.

And the Thai movement has caused another ripple in Laos, a secretive communist nation where fear of the government hushes any challenge. There, the hashtag “if Laos’ politics was good” has bounced around social media in an unprecedented questioning of the government.

Also on Monday, the opposition bloc in parliament called on Prayuth to resign in a heated special session to discuss the snowballing pro-democracy protests, said Sompong Amornvivat, leader of the opposition Pheu Thai party, the largest single party in parliament.

“You should resign … and all will end well,” he said during the parliamentary session.

Opening the session, Prayuth acknowledged some of the demonstrators’ concerns but warned that the country needed to “control illegal protests”.

Thailand has sunk into political crisis after months of protests across the country, with tens of thousands now regularly massing in Bangkok calling for the government of Prayuth, the former head of the army, to resign, the drawing up of a new constitution and the release of dissidents.

Seasoned political players see the parliamentary session as a sign the street movement is starting to gain traction in the political arena, where Prayuth and his allies have staunchly refused to respond.

“It‘s highly likely that the two-day extraordinary session will turn up the heat of the already sizzling political atmosphere,” Chaturon Chaisang, a veteran politician from the pro-democracy bloc and former activist, posted on his Facebook page.

Others said the session, which runs through Wednesday, is little more than a game of political dress-up.

With a debate-only format, the session is “all style over substance”, Khemthong Tonsakulrungruang, a law professor at Chulalongkorn University told This Week in Asia. “It doesn‘t move any needles and the protesters definitely won’t fall for it. We will see more escalation on the streets.”

He added: “One would think that some kind of a compromise on constitutional change would quell some tensions, but it‘s very clear that the government plans to drag its feet as long as possible.”

The protesters on Monday also submitted a letter to a German embassy official.

Nititorn Lumlua, a lawyer who helped organise the gathering at the embassy, said the protesters hoped German authorities would get accurate information about the political situation in Thailand.

The German government has already warned the Thai king not to rule his country remotely from its soil.

The king, who ascended to the Thai throne in 2016, has been back home since early October and plans to stay until next month.