Western sanctions on Russia are like declaring war: Putin 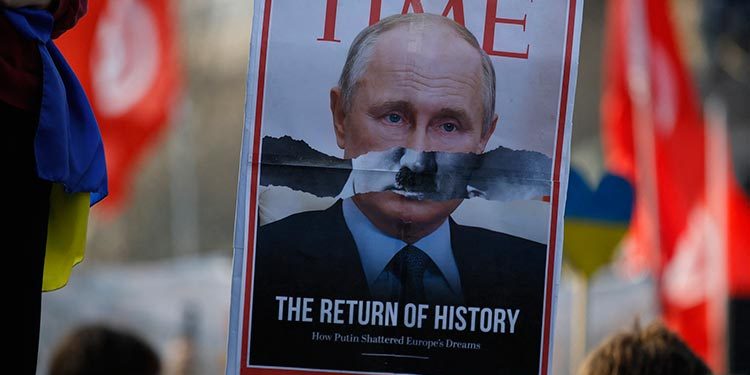 Anadulo Agency – The West’s imposing sanctions on Moscow is like a declaration of war, Russian President Vladimir Putin said on Saturday.

Speaking at a meeting with women employees of some Russian airlines ahead of the International Women’s Day on March 8, Putin said many problems Russia is facing are means of the fight against the country.

“A lot of what is happening, what we are facing, are ways of fighting Russia. The sanctions that are being imposed are akin to a declaration of war, but, thank God, it hasn’t come to that yet,” he said.

Putin warned that any attempt to introduce a no-fly zone over Ukraine would be joining the conflict.

“But any movement in this direction will be considered by us as participation in the armed conflict of the country from whose territory threats to our servicemen will be created.

“We will immediately consider them as participants of the military conflict, and it doesn’t matter which organisations they are members of,” he stressed.

Putin reiterated that Russia could not “pass by” the statements of the Ukrainian officials about their intentions to develop nuclear weapons, saying that its neighbour could quickly become a nuclear power with the Soviet heritage and Western help.

“Ukraine has had nuclear competencies since Soviet times. And as for enrichment and nuclear elements, they can organise this work. In addition, Kyiv has missile competencies. And there, from across the ocean, they will also help to do it.

“We seek the demilitarisation of the country, because we want clearly and explicitly understand which weapons are where, under what control,” he said.

In his remarks to follow, the Russian president said Ukraine’s intention to join NATO could lead to severe consequences as well.

If Ukraine were a nuclear power and a member of NATO, the alliance would not need ballistic missiles to deter Russia, it would keep Russia at a nuclear gunpoint right on its own border, Putin said.

The goals of the demilitarisation, he said, have almost been achieved as warehouses with weapons, ammunition, aviation, and air defence systems have been almost destroyed.

Putin urges to address issue of foreigners detained in Ukraine

Putin said Russia had tried to end the conflict in Donbas peacefully for eight years, and that the demands of the breakaway regions “were not big.”

He also said the measures taken against them were too tough, and blasted the Western countries for not noticing the problems of people living in Donbas for almost a decade.

On the eve of launching a war on Ukraine last week, Russia recognised two separatist-held enclaves in Ukraine’s Donbas region as independent states.

On the evacuation of civilians, Putin said Russia immediately agreed to Ukraine’s suggestion to organise humanitarian corridors in the cities of Mariupol and Volnovakha, but civilians are not allowed to leave.

“Look what is happening – no one is allowed to leave. They cover themselves like a human shield. Who are they after it? Of course, neo-Nazis,” he said.

He also stated that around 6,000 foreign students have been held at a railway station in the Ukrainian city of Kharkiv, calling them “hostages.”

Putin said Russia informed the Ukrainian authorities, Western leaders and UN Secretary-General Antonio Guterres about foreign students detained by the Ukrainian military, but no actions have been taken so far to resolve the issue, with only verbal promises given.

He also said the Russian military spotted militants from the Middle East and some European countries in Ukraine.

Putin also explained his decision to put Russia’s nuclear forces on high alert, saying it was triggered by the statement of British Foreign Minister Elizabeth Truss, who said NATO is taking part in the conflict in Ukraine.

The president denied that Russia will introduce martial law, saying the army rule is imposed in the country by a presidential decree in case of an external aggression.

“But we do not have such a situation and, I hope, will not,” he said.

From the South China Sea to the Middle East, the US fails to live up to promises, China says