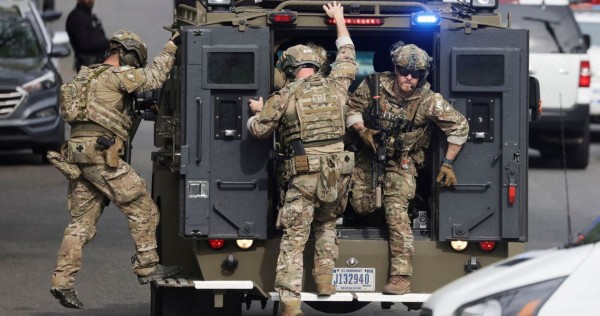 WASHINGTON – Police issued a bulletin seeking a man they identified as a “person of interest” in a shooting that left four people wounded near an elite prep school in Washington, D.C., on Friday (April 22) as investigators searched door-to-door for the culprit.

Eyewitnesses told Reuters and local media outlets they heard bursts of gunfire in the upscale Van Ness neighbourhood of northwest Washington adjacent to the Edmund Burke School just as classes were about to be dismissed for the day.

One man told television station WUSA-TV he heard rapid-fire shots lasting about a minute, then saw a woman running out of a building who appeared to have been grazed by gunfire, followed by other individuals who were apparently wounded.

The eyewitness said he saw other people on the street taking cover behind parked cars and pointing up to a balcony where they presumably believed the gunshots originated.

Authorities said they had no motive for the shooting, which took place along Connecticut Avenue, a major thoroughfare through the city.

Three people struck by gunfire near the private college preparatory school were taken to area hospitals — a 54-year-old man and a woman in her mid-30s with severe wounds, and a 12-year-old girl wounded in the arm, police said.

A fourth victim, a woman in her mid-60s, was treated on the scene for a slight graze wound, according to Assistant Police Chief Stuart Emerman.

He said police fanned out across the neighbourhood looking for possible perpetrators, and that several individuals seen fleeing the scene were briefly detained for questioning, though none was believed to have been involved.

At a second briefing Friday evening, Emerman said police were seeking a “person of interest” they named as 23-year-old Raymond Spencer, of suburban Fairfax, Virginia, identified by investigators of through social media postings.

Police did not specify the nature of those postings. But an individual identifying himself as Raymond Spencer had posted series of messages in the online platform 4Chan with video that appeared to show gunshots fired from the vantage point of an upper-floor window, with the misspelled label: “Shool shooting!”

“We’d like to speak to Mr. Spencer, figure out if he has any role in this or any connection to this, and hopefully that will lead us in the direction to identify what happened here and why,” Emerman said.

Earlier, Emerman said members of the public were being warned to steer clear of the area as the investigation continued.