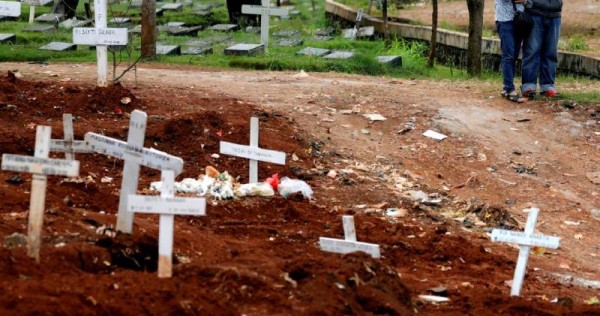 JAKARTA – As Indonesia’s most populous province weighed tough movement restrictions to stop the new coronavirus, it turned to a loosely-knit volunteer group of data scientists and health experts.

The Kawal Covid-19 (Guard against Covid-19) group organised a data model presented to the provincial governor that showed there could be 70,000 deaths by July in West Java if no restrictions were imposed compared with only 20,000 if it took tough action.

“They were keen to provide help and we accepted it,” said Ridwansyah Yusuf Achmad, an adviser to the West Java governor who organised the online meetings with Kawal volunteers and praised the group as patriotic for donating its expertise.

He, and other West Java officials, said the modelling from Kawal had swung the argument.

In the face of patchy data and conflicting advice from Indonesia’s central government over measures to fight coronavirus, Kawal’s 800 volunteers have emerged as an increasingly important source of information and guidance.

President Joko Widodo’s government has been reluctant to impose travel bans and other measures that could damage the economy in the world’s fourth-most populous country, a 5,000-km (3,100-mile) wide archipelago.

Kawal has set out a clear argument for tougher action in the Southeast Asian country with the biggest death toll in the region by far.

Pandu Riono, an epidemiologist at the University of Indonesia who is part of Kawal, presented the data to officials in West Java, home to over 50 million of Indonesia’s 270 million people.

“West Java had the highest risk of transmission among Indonesian provinces,” he said. “We recommended a wider lockdown.”

On May 20, West Java Governor Ridwan Kamil proclaimed the speed of transmission had been cut to a third and that the “curve had flattened”.

The president’s office, the health ministry, and the communications ministry referred questions on Kawal to the presidential task force on Covid-19. However, Achmad Yurianto, the spokesman for the task force, told Reuters he had never heard of the group.

The government, he said, has taken appropriate measures in fighting the virus.

“This is learning by doing. We’ve never had an experience in handling Covid, right?” Yurianto said.

Kawal’s origins lie in volunteer groups that were set up to monitor 2014 and 2019 elections and which published crowd-sourced results to try to prevent manipulation.

It was launched on March 1, a day before Indonesia declared its first cases. Until then, the health minister had declared it was a “blessing from God” that Indonesia had no infections, although doctors feared that was more due to a lack of testing.

“We want to prevent Indonesia from being complacent,” said Kawal co-founder Ainun Najib, adding that the key to saving lives was implementing clear policies.

“The people who were supposed to take care of it didn’t,” said Najib, who also heads data analytics at Southeast Asian ride-hailing company Grab.

It is not the only initiative in the field in Indonesia’s booming technology sector. Another one, Lapor Covid-19 (Report Covid-19) seeks to crowdsource coronavirus information.

Other healthtech startups provide free online consultations, which the government itself has urged people to use.

Indonesia’s official figures show 22,750 infections and 1,391 dead, but officials have said the deaths only include those who have tested positive for the virus. The main doctors’ association says the figures could be higher because Indonesia has among the world’s lowest rates of testing.

Kawal compiles raw data from provincial governments and hospitals that also shows those cases and deaths for which doctors can see no reason other than coronavirus – but which were never tested.

According to Kawal’s calculations for 22 of Indonesia’s 34 provinces, at least 4,016 Indonesians have died with acute symptoms of the coronavirus.

That could make the death toll well over 5,400 – about four times the official figure.

“With data guarded centrally during the pandemic, it’s a good thing that there’s people who want to provide help from the outside,” said Shela Putri Sundawa, a Jakarta hospital doctor.