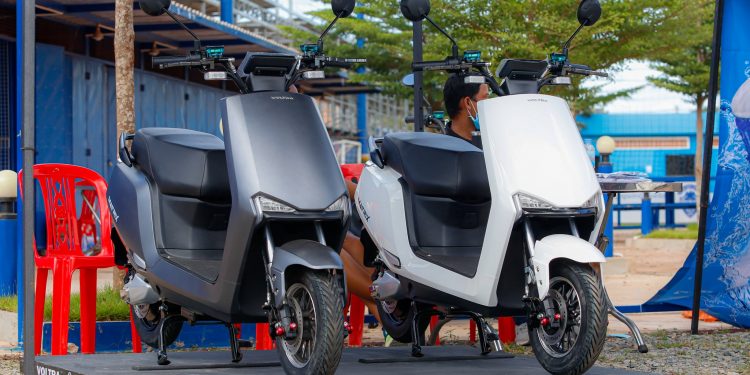 He was speaking at the signing ceremony of the Memorandum of Understanding between Voltra Motors and Forte Insurance Group yesterday.

“In June 2023, Voltra is planning to launch the first carbon-free factory to manufacture our electric motorcycles in Cambodia, a first in the automotive industry and with the help of the Institute of Technology of Cambodia. By this announcement, Voltra wants to show that we are now a major player in electric vehicles in South East Asia and show the neighbouring countries that Cambodia can also produce technology with international standards.”

He said the company would produce all body parts of electric motorcycles in the country from September this year.

The MoU was signed by Youk Chamroeunrith, CEO, Forte Insurance Group, and Yann at the Forte head office in the capital.

While talking about the MoU, Yann said, “Most users of motorcycles or cars are reluctant to buy electric vehicles because there is no insurance in the event of a claim or malfunction. Over the past few months, Voltra and Forte have been working hard to set up the first electric vehicle insurance in the Kingdom of Cambodia. We offer one-year liability insurance for each LEV purchased.”

“By this strong partnership, we expect to accelerate the development of the EV and LEV field in Cambodia and jointly show our commitment to preserving the environment in Cambodia,” he added.

According to Yann, Voltra is the first electric vehicle company to import and offer Lithium Li-ion technology batteries to the public and the first company to provide a commercial electric fleet for the international logistics company DHL Express.

Chamroeunrith, while talking at the function, expressed his delight in cooperating with the electric vehicle manufacturer in the insurance sector.

Meanwhile, Yann said Voltra, which has showrooms in Phnom Penh and Siem Reap, would open two other branches in Battambang and Kampot this year.

“With over ten years of management experience in the electric vehicle industry, the Voltra project started in 2015. Voltra is now the first and only Cambodian brand specialising in two-wheeled electric vehicles in Cambodia, protected as a trademark (PI) since 2017,” he said.

Some of the customers of Voltra, which offers a two-year warranty for its models, include DHL Express, Smart Axiata, UNDP, French Embassy, and Switzerland Consulate, the CEO pointed out.