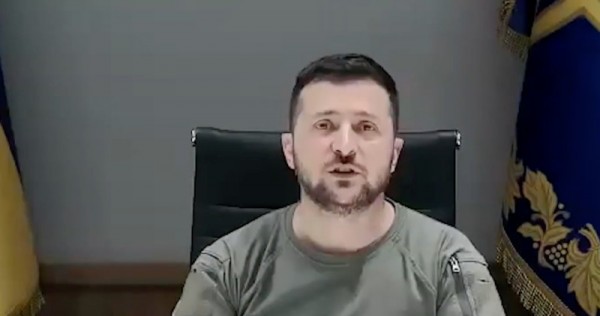 Ukraine is seeking an opportunity to speak “directly” with China about its ongoing war with Russia, President Volodymyr Zelenskiy has said, noting that his country had consistently sought close ties with Beijing in the years preceding the conflict.

In an exclusive interview with the Post, the Ukrainian leader urged the Asian superpower to use its outsize political and economic influence over Russia to bring the fighting to a stop.

“It’s a very powerful state. It’s a powerful economy … So (it) can politically, economically influence Russia. And China is [also a] permanent member of the UN Security Council,” Zelenskiy said. The 40-minute interview over Zoom was his first with an Asian media outlet since Russia’s invasion of his country on February 24.

“I would like to talk directly. I had one conversation with [President] Xi Jinping that was a year ago,” he said. “Since the beginning of the large-scale aggression on February 24, we have asked officially for a conversation, but we (haven’t had) any conversation with China even though I believe that would be helpful.”

While he hoped China would take a different approach to the conflict – it has thus far resisted censuring key economic partner Russia over the invasion – Zelenskiy said he had always wanted “the relationship between Ukraine and China to be reinforced and to be developed every year”.

In 2021, China was Ukraine’s top trading partner, with a trade turnover worth almost US$19 billion, according to figures from Ukraine’s embassy in China.

Zelenskiy said Xi was one of the few world leaders who had visited Ukraine “at least once”, adding that the Chinese leader warmly recalled his ties with the eastern European country during the call between the two leaders last year.

The Ukrainian leader said he understood China wished to maintain a “balanced” attitude towards the war, but that it was important to note the conflict was predicated upon Russia’s unprovoked invasion of Ukrainian sovereign territory.

“The Russians are the invaders … this is a war on our territory, they came to invade. China, as a big and powerful country, could come down and sort of put the Russian federation [in] a certain place,” he said. “Of course, I would really like China to review its attitude towards the Russian Federation.”

Zelenskiy, 44, said he believed China and Ukraine shared similar values, such as the love for family and children. “Everyone loves their kids. Everyone wants to live in peace, wishes to have some stability,” he said.

Since the onset of the conflict, Zelenskiy has used social media and appeared in dozens of media interviews to pressure the international community – and Western nations in particular – to offer Ukraine more help.

Russia and President Vladimir Putin have increasingly become pariahs in the eyes of the West and its key Asian partners, though Moscow has insisted the invasion was justified as Kyiv was allegedly mistreating Russian speakers in eastern Ukraine.

In an interview with the Post earlier this week, Russia’s envoy in Singapore Nikolay Kudashev said Moscow’s status in Asia remained unshaken and “snow-white” despite Western censures, adding that efforts to isolate his country had failed.

China, along with the likes of India, has resisted taking sides in the conflict. It has pledged some US$2.37 million in aid to Ukraine since the war began, according to a database compiled by Germany’s Kiel Institute for the World Economy.

Beijing officials have suggested that the West played a major role in fomenting ill will in Ukraine towards Russia, precipitating the war.

In the interview, Zelenskiy urged China to use its UN Security Council status to “show” countries that they needed to comply with international norms.

“If we are operating without the legislation, then why should we have the Security Council at all, if any country … or several countries in the world, could simply decide to violate the rules militarily?” he asked.

Zelenskiy made clear that he believed China had the economic levers to pressure Putin to end the war.

“I’m confident, I’m sure that without the Chinese market for the Russian Federation, Russia would be feeling complete economic isolation,” he said. “That’s something that China can do – to limit the trade (with Russia) until the war is over.”

Zelenskiy said Russia was not spending increased energy revenue amid rising fuel prices on its people, as “we can see how the people are living in Russia”.

Instead, Moscow was spending the additional funds on “specific weapons which they use to fight against Ukraine”.

“This is something that has to be stopped,” he said.

The Ukrainian leader also echoed his recent warning about the war’s long-term implications on global food and energy security during the interview. Chinese exports could be negatively affected by countries spending more on food, fuel and defence in the aftermath of the conflict, Zelenskiy said.

“The people would have to pay for energy resources rather than for products coming from China … Exports from China would be decreasing. That’s 100 per cent,” he said.

Asked if he would welcome Chinese assistance in the reconstruction of his war-ravaged country, Zelenskiy said he hoped “China, Chinese businesses” and “the whole world” would contribute to the process.

“I really would like the whole world to [unite] over this process. It’s very hard for us to overcome this,” Zelenskiy said, adding that Russian missile attacks had decimated infrastructure in many cities.

After the invasion, the world’s largest chip-makers began cutting off deliveries to Russia, which has long relied on semiconductor imports from Asian and Western companies.

Zelenskiy said Kyiv’s intelligence services were “working as effectively as in China” and that his administration was well aware of which countries Moscow had approached for assistance in this regard.

Still, the president said he would not like to point fingers at these governments but rather focus on unifying them against Russia.

“I would like to concentrate on unifying the whole world against the tyranny in Russia, and not … undermine the unity by saying that one country is helping, the other is not,” he said.