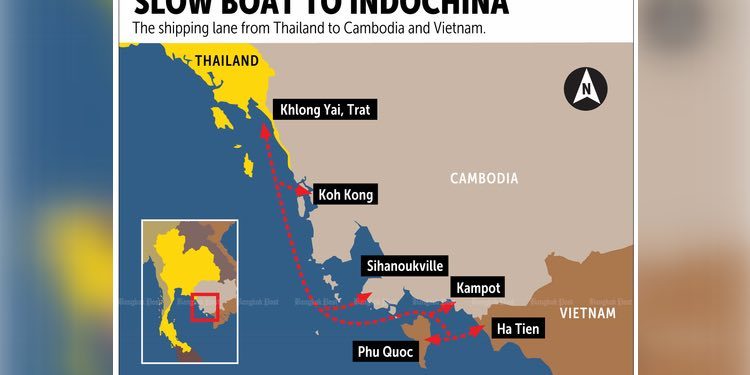 Vietnam has asked the government to expand a shipping navigation route between its Phu Quoc island and Thailand as part of a coastal shipping lane cooperation deal previously agreed by the two countries and Cambodia.

The request was made at a meeting between Phan Chi Thanh, the Vietnamese ambassador to Thailand, and Transport Minister Saksayam Chidchob on Wednesday.

As agreed after four tripartite meetings on multilateral cooperation, the ideal coastal shipping route would stretch from Khlong Yai district of Trat in Thailand to Phu Quoc Island in Vietnam with three stops in between, namely Sihanoukville in Cambodia, Kampot in Cambodia and Ha Tien in Vietnam, Mr Saksayam said on Thursday.

This project was first initiated in 2014 when both the Thai and Vietnamese prime ministers signed the deal. After that, a tripartite committee was formed to work together to jointly implement it, he said.

Coastal shipping cooperation will provide more opportunities for medium- and small-sized cargo ships to operate on the Thai-Cambodian-Vietnam route, which is believed to have helped boost investments in the three nations, he said.

More details about implementing such cooperation are expected to be given in the next tripartite meeting, which will be conducted remotely between related authorities, he said.

Mr Saksayam said the Thai government attaches priority to the development of this shipping lane, describing it as a key economic driving force, he said.

Thailand is now looking forward to resuming the development of a land transport link it had previously started with Cambodia and Laos soon, now that the Covid-19 pandemic is easing, he said.

More rules and regulations these three countries now have regarding customs protocols will have to be reviewed to meet a common standard, which is a requirement for operations among them running smoothly, he said.

At Wednesday’s meeting, the Vietnamese side had also sought the government’s permission for VietJet Air to increase the number of aircraft it operates to and from Thailand to keep up with the growing demand for air travel services, he said.

The Civil Aviation Authority of Thailand will consider the request under the Asean Open Sky Policy and Air Freedom Rights, he said, adding that VietJet Air’s request to add more aircraft will substantially raise Vietnam’s overall investment value in Thailand.

After Biden-Xi call, US warns China it could face sanctions if it backs Russia in Ukraine