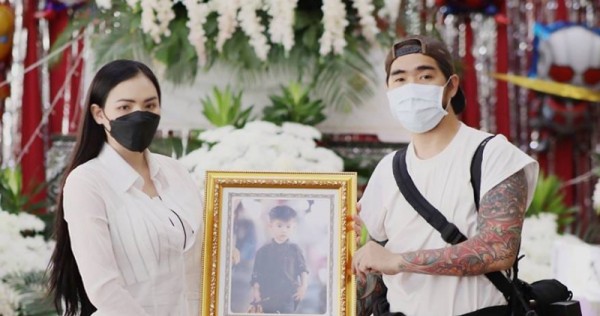 This is no time to be judgmental, reach for the tissues.

This is really about a mother’s grief. That she may also carry a huge burden of guilt only makes it sadder.

Thai model Wiyada Pontawee, who posts racy photos online, was partying at a villa in Pattaya on Valentine’s Day when her two-year-old son drowned in the pool there.

She was at the party with her husband and two children as well as other adult models.

Her husband is also her photographer and the event was supposed to be a photo shoot too, international media reports said.

She posts photos on the OnlyFans platform where paying subscribers can view them.

There was even a shot of the voluptuous 26-year-old in front of the pool in a barely-there bikini.

The boy, who was called Vio, was playing in the water with his younger brother and another child.

Then his father noticed that Vio seemed to be struggling, and rushed to save him.

Emergency services were called at 10pm on Monday (Feb 14).

“He was choking, so I jumped in to help him but it was too late,” the father was quoted as saying.

The Sun reported that a rescue service spokesman said: “The father and mother carried the body of a two-year-old boy and asked for help at the entrance of the villa. Rescue workers tried to help and pumped the heart to try and save his life.”

The parents were weeping as the officers rushed the boy to the hospital.

“The medical team provided the best assistance but were unable to save the ,” the spokesman said.

Around 3am on Tuesday, the mother put up a post on her Facebook page: “I can’t take it anymore. I don’t want to live in this world.”

The boy’s funeral was held on Wednesday. In front of his photo was a birthday cake.

The child would have turned three that day, Feb 16.

The mother wrote: “Attending Vio’s birthday for the last time.”