US-China meet at the Shangri-La Dialogue in Singapore 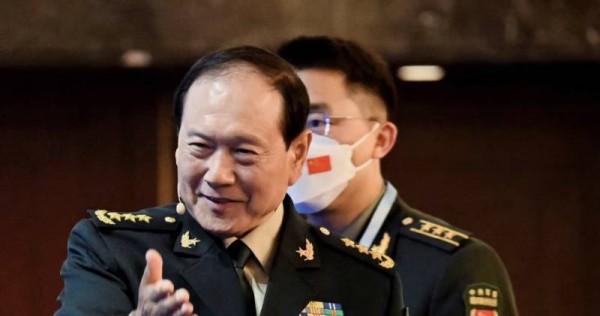 The US-China rivalry took centre stage again at the Shangri-La Dialogue, Asia’s biggest defence forum, which attracted more than 500 delegates this year after the Covid-19 pandemic forced a two-year hiatus to the annual event.

But behind high-profile pitches by China and the US for competing visions for the Indo-Pacific were the dozens of bilateral conversations held behind closed doors and off-limits to journalists.

The secrecy over the whereabouts and itinerary of the Chinese delegation – numbering more than 50 active officers, academics, and retired diplomats and officials – kept journalists curious, as they tried to peer through gaps in doors to see which flags had been set up for the next round of talks.

Friday night at the Shangri-La Singapore hotel’s ballroom offered a rare sighting of defence analysts and researchers in the ranks of China’s People’s Liberation Army (PLA).

While military officers from 59 countries were dressed in either navy blue, khaki, green or white, the Chinese delegation stood out in their masks emblazoned with the national flag.

The bright red flag on the masks could be spotted from afar, even in the crowded ballroom where hundreds of guests mingled and dined after Japanese Prime Minister Fumio Kishida’s opening speech calling for a free and open Indo-Pacific.

But for the rest of the time the Chinese officers stayed largely out of view, camped in their base at an isolated wing of the hotel, unlike before the pandemic, when they could be seen at a cafe in the main foyer.

Almost all of their bilateral talks have taken place in the State Room, accessible from the lobby via a walkway shielded by a row of potted bamboo, screening the Chinese delegation from any potentially inquisitive children and other hotel guests swimming nearby.

Worries about bringing the coronavirus to China when the leave on Sunday (June 12) overshadowed their visit. Unlike most of the world, China has enforced a form of the zero-Covid policy with localised lockdowns.

Before talking to a Chinese state media outlet, a PLA researcher had to phone superiors to get permission for a maskless interview.

“The journalist is wearing a mask,” the researcher said on the phone. “But it will affect the sound quality … It’s only the reporters around.”

The Chinese defence ministry told state media journalists covering the forum to protect themselves and not to press on if the environment was unsafe, according to a person with knowledge of the briefing.

Comments from the PLA on the sidelines of the conference were hard to come by so when journalists got news that Chinese Defence Minister Wei Fenghe was meeting a foreign counterpart, they rushed to the State Room and tried to get a coveted comment, however short, from the minister.

And on Sunday they finally did.

After meeting Japanese Defence Minister Nobuo Kishi, Wei left the conference room to be greeted by a field of cameras and camcorders of reporters trying to snatch a word before he entered a lift. One reporter asked: “Why did the talks take so long, minister?”

“Deep exchange,” Wei said in his signature thick Shandong accent as he was engulfed by aides in the lift.

Security was tight for the entire defence conference. From day one, metal detectors, mobile CCTV cameras and X-ray machines scanned bags for weapons and dangerous tools.

Police only became more vigilant on Saturday, when US Defence Secretary Lloyd Austin gave a speech.

The machines were soon wrapped in plastic and taken away on Sunday, the forum’s final day. Uniformed guests gave way to young children who could once again sprint across the lobby without risking knocking down expensive tripod-mounted TV cameras – or bumping into Chinese defence officials.

Gun-reform deal reached in US Senate with key Republican backing