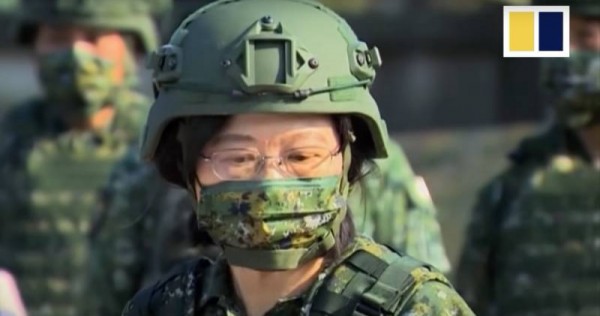 The head of Taiwan’s National Security Bureau said the Russian experience in Ukraine has made it unlikely that Beijing will send forces to the self-ruled island during the remainder of President Tsai Ing-wen’s term.

But Chen Ming-tong warned legislators that the island must not let down its guard, because any attack from the mainland would be an all-out operation.

Chen was responding to questions during Monday’s (March 27) legislature session on whether the People’s Liberation Army would follow Russia’s lead in Ukraine to attack Taiwan.

Beijing, which considers the island as part of its territory, has been ramping up pressure on the island since Tsai refused to accept the one-China principle. Warplanes fly toward Taiwan almost daily and PLA exercises have been staged near the island.

Wen Yu-hsia, from the main Taiwanese opposition party the Kuomintang (KMT), asked Chen to evaluate the chances of an attack, adding that “even the US Indo-Pacific commander does not rule out the possibility”.

Wen was referring to an interview with Admiral John Aquilino published by the Financial Times on Friday, in which he said the Russian invasion of Ukraine showed Asian nations must take the possibility of a PLA attack on Taiwan seriously.

Aquilino said he was concerned about Beijing’s increasing pressure on the island, and the need to be prepared for any eventuality.

“As of five months ago, nobody would have predicted the war in Ukraine, and the number one lesson from it should be that anything could happen.”

But Chen said Beijing had definitely learned from Russia’s experience and would not “rashly” send forces to Taiwan.

“Beijing has never renounced the use of force against Taiwan and it has long been an open plot for it to unify Taiwan ever since 1949,” he said, referring to the end of the civil war, when KMT forces fled to the island in defeat.

Chen said the Ukraine war had certainly allowed the Communist Party to understand it should not make any move without careful consideration – and once it decided to strike, it must be an all-out operation.

He said Russia had made a lot of mistakes, which included starting its invasion without an organised plan, and that Beijing would do all it could to avoid making the same errors if it chose to attack the island.

“I can tell in the next three years of the remaining tenure of President Tsai, Beijing is unlikely to send forces to attack Taiwan,” he said, adding his assessment was made from his professional viewpoint.

“But we must not relax our vigilance and must be well prepared militarily and once they attack us we must counter-attack. We are not a limp chicken doing nothing.”

Expanding on what other lessons had been learned from the war, Chen said Beijing had been surprised at the success of international sanctions, including taking Russia out of the Swift banking system, pushed through with the support of Western allies.

“Beijing [will be] more cautious in making any move [against Taiwan] as evidenced by the intervention of foreign forces in the Ukraine war,” he said.

He noted that while the US did not send forces to help Ukraine – for fear of triggering a third world war – its other military and monetary aid was another restraint on the movements of Russian troops.

Chen said the US decision to help Ukraine was made without the domestic legal requirement that underpinned Washington’s commitment to ensure Taiwan’s defence capability against Beijing.

“We have the Taiwan Relations Act which [US President Joe] Biden has used to consolidate ties with us, and this would make Beijing think carefully before sending forces to attack Taiwan,” he noted.

What is a no-fly zone, and why won’t the U.S. enforce one over Ukraine?