NOTE: This article contains disturbing images of victims killed and injured in Kramatorsk. 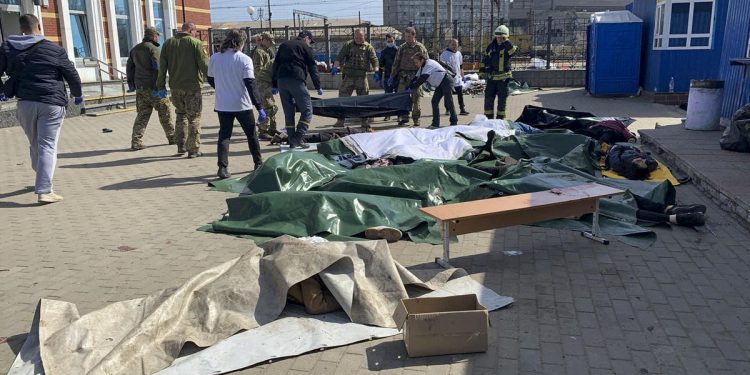 At least 39 people were killed and around 100 injured Friday in a Russian rocket attack on the Kramatorsk train station, one of the easternmost stations still operating in Ukraine, Ukrainian officials said. The station was being used to evacuate civilians from eastern Ukraine’s Donbas region. At least four children were killed in the attack, according to Ukraine’s national security service.

“Lacking the strength and courage to stand up to us on the battlefield, [the Russians] are cynically destroying the civilian population,” Ukraine’s president Volodymyr Zelenskyy said. “This is an evil that has no limits. And if it is not punished, it will never stop.”

Around 4,000 people, mostly women and children, were at the train station at the time of the attack, the mayor of Kramatorsk said. Graphic images shared on social media appeared to show a number of casualties in civilian clothing.

“This is a deliberate strike on the passenger infrastructure of the railway and the residents of Kramatorsk,” the head of the country’s national railway, Alexander Kamyshin, wrote on social media.

Ukrainian security forces were seen inspecting the remains of a missile across from the train station after the attack. The missile carcass had the phrase “for children” written in Russian on its side. The specific Russian phrase has a meaning closer to “on behalf of children” or “in retaliation for an attack on children,” rather than “aimed at children.”

Russia denied it had carried out the attack, blaming it on Ukraine’s own forces.

“All statements by representatives of the Kyiv nationalist regime about the ‘rocket attack’ allegedly carried out by Russia on April 8 at the railway station in the city of Kramatorsk are a provocation and are absolutely untrue,” the Russian defense ministry said.

Officials have been warning that Russia would intensify its attacks on the eastern Donbas region of Ukraine, and civilians have been rushing to evacuate the area.